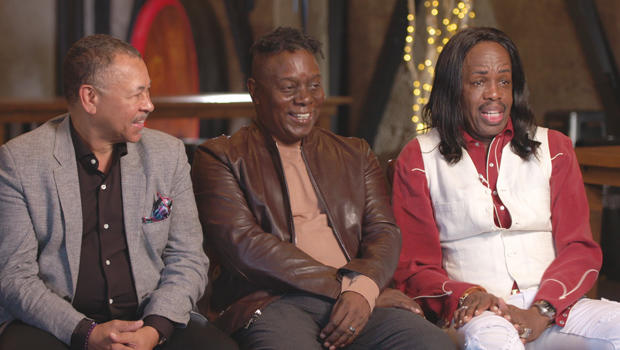 Earth, Wind & Fire got its name from the elements in the astrological chart of the band's founder, Maurice White. Though he died after complications from Parkinson's disease three years ago, the surviving members of the band are still inspiring audiences around the world. "CBS This Morning" caught up with them at Northern California's Mountain Winery, where they continued to spread Maurice's music – and, more importantly, his spiritual message of unity to generations of fans.

After nearly 50 years of performing, Earth Wind & Fire still rehearses before every show.

"He is!" laughed Ralph Johnson.

Philip Bailey added, "It's true. He is. He'll be the first. He never met a stage he didn't like!"

You could say White grew up on stage. He was 19 when his half-brother Maurice White founded Earth Wind & Fire in 1970. The group would help define the soundtrack of early blaxploitation films, but when their first two albums for Warner Records failed to move up the charts, the original lineup disbanded, leaving just Maurice and Verdine.

The brothers first drafted drummer Ralph Johnson, then singer Philip Bailey. "We went to Philip's house, Rice and I did. You know? I think it was on a Sunday night, too."

"You remember that detail?" asked Miller

"Well, Rice talked to him and he said, 'I just want to be in the best band in the world.'"

"How'd that turn out?" asked Johnson.

Maurice White approached the band's second act as a mission to broaden its appeal and better focus its message.

Johnson said. "He wanted to deliver a message of hope and love and respect and raise the consciousness of the people. So, each one of us was hand-picked for that mission."

Miller asked, "Would you call it a spiritual journey?"

"And all of you were on board with it?"

"That goes to another point: There was no drugs or alcohol on your mission. I mean, you lived clean when it came to your food."

"Some of us did; some of us didn't," Bailey said. "We can't tell that lie. There were people in the group who got high and we got high. You know, Maurice didn't. There was some. I smoked a lot of weed; there was some experimenting going on."

Miller asked, "At what point did you start noticing the crossing-over taking place?"

"Well, you can't really put your finger on it, but you know, a hit don't hurt you!" Bailey laughed. "'Shining Star' pretty much just broke that door open."

"It was just an electrical time where there was nothing that we could do that was wrong. It was just hitting on all cylinders," Bailey said.

Though it would be years before he acknowledged his illness, Maurice's diagnosis of Parkinson's disease forced him from touring in 1994. He died in 2016.

Verdine White said, "Don't forget now, that hole we had was huge. So, we had to really put it together, which we did."

White, Bailey and Johnson continue their mission to bring music to the masses, and they've seen that mission accomplished.

More than 12 million people have watched this video on YouTube featuring Earth Wind & Fire fans of all ages:

Miller asked, "What does that say to you?"

"It says that music is a powerful tool," Bailey replied.

White said, "We are very blessed to be a part of something that was, and is, so well-received around the world."

Miller said, "You'll be sitting in that audience at the Kennedy Center; the rainbow ribbon signifies cultural impact, more than just music."

"Kind of gets back around to Maurice's intent from Day One," said Johnson.

"Yup, to render a service to humanity," said Bailey.