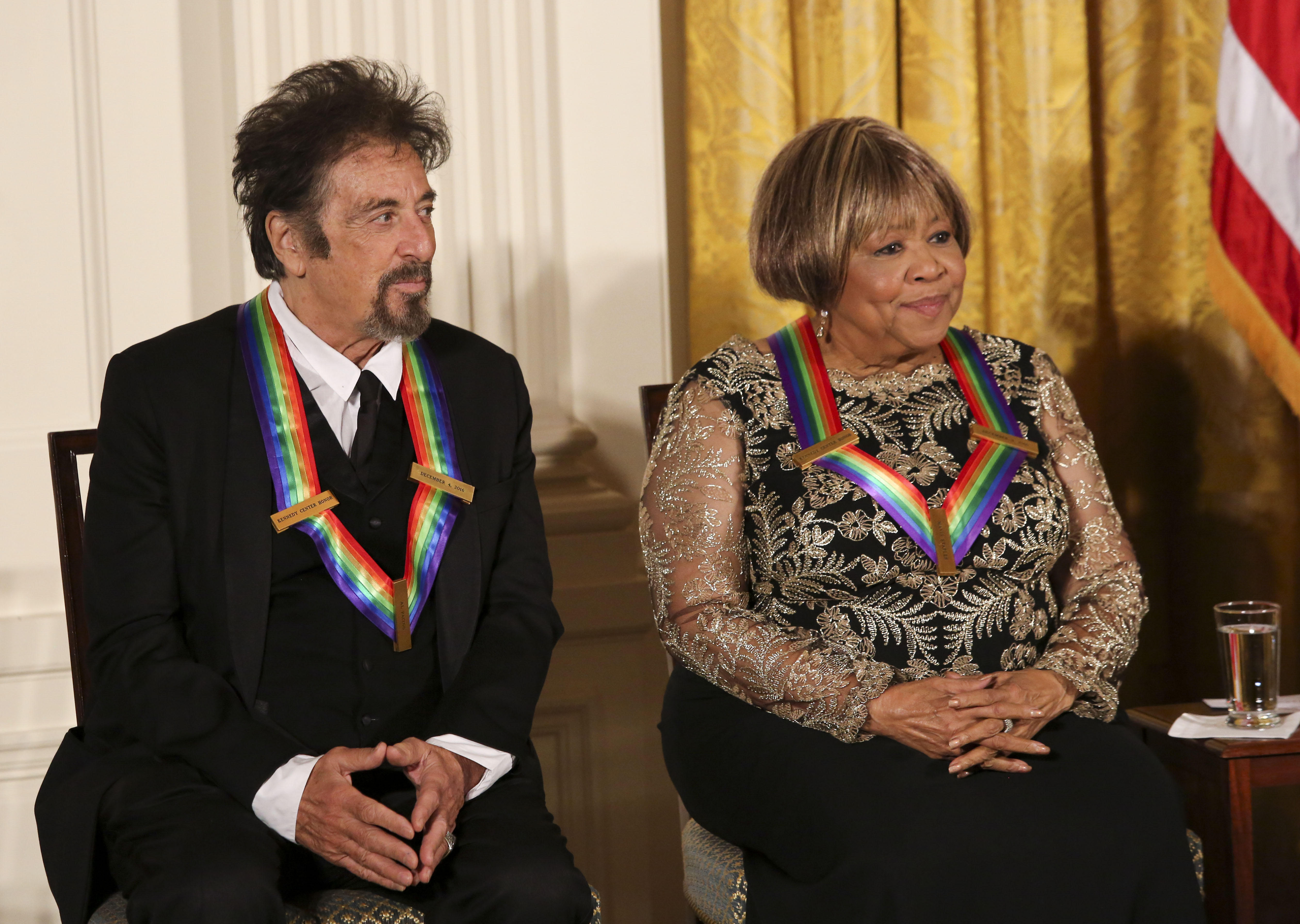 WASHINGTON -- The longest, loudest standing ovation of the Kennedy Center Honors gala wasn’t reserved for Al Pacino, Mavis Staples or the Eagles. Instead, it went to the man sitting to their left, attending his eighth and most likely his last honors presentation: President Barack Obama.

While politics were absent from the tributes to the performers who were recognized for influencing American culture Sunday night, the arts community’s affection for Obama -- and its nervousness about President-elect Donald Trump -- was palpable in the Kennedy Center Opera House.

The president and first lady Michelle Obama were introduced last, after Pacino and his fellow honorees: gospel singer Staples; pianist Martha Argerich; singer-songwriter James Taylor; and Don Henley, Timothy B. Schmidt and Joe Walsh, the surviving members of the Eagles.

After a sustained ovation, host Stephen Colbert greeted the crowd of Washington insiders as “endangered swamp-dwellers,” referencing Trump’s “drain the swamp” campaign pledge. He joked that Obama would need to receive the honor to attend again and that “unlike the Nobel Peace Prize, they don’t just give these away.”

The Kennedy Center Honors are in their 39th year, a period that has included six presidents -- three Republicans, three Democrats -- and all have taken time to welcome the recipients. But the 2016 election was noteworthy for the way A-list performers lined up behind Obama and Democratic nominee Hillary Clinton, while Trump had relatively few celebrity endorsements.

Although the president has no say in who receives the awards, Colbert joked that next year’s honorees would include Scott Baio, Gary Busey and Meat Loaf.

“For the past eight years, the White House has given us a leader who’s passionate, intelligent and dignified,” Colbert said, and the crowd rose for another prolonged ovation, prompting Obama to stand and wave.

“Sir, I don’t even know why you stood up. I was talking about Michelle,” Colbert said.

Earlier, at the White House, Obama welcomed the honorees at a reception and said participating in the gala was “one of the perks of the job.”

“The arts have always been part of life at the White House because the arts are always central to American life,” Obama said. “That’s why over the past eight years Michelle and I have invited some of the best writers, musicians, actors and dancers to share their gifts with the American people and to help tell the story of who we are.”

Kennedy Center chairman David Rubenstein also thanked the Obamas, noting that the president isn’t required to attend the honors or host a reception. He offered them a “golden ticket” good for free admission to any event at the center.

Another standing ovation went to Bill Clinton, who made a surprise appearance on stage to talk about how Taylor’s music resonated with him and the American public in times that tested the nation’s resolve.

“Our nation was reeling from the pain of Vietnam,” Clinton said. “James was there to satisfy our hunger for both intimacy and authenticity.”

Politics aside, the honors proceeded as usual, with musicians and actors taking the stage to pay tribute to the honorees, who stood on a balcony, waving and applauding as they wore the event’s signature rainbow-colored garlands. The ceremony will be broadcast Dec. 27 on CBS and CBS All Access at 9 p.m. EST.

The tribute to Pacino included remarks by Sean Penn and recitations of Shakespeare by Laurence Fishburne and Lily Rabe. Chris O’Donnell and Gabrielle Anwar re-enacted the tango that Pacino danced with Anwar in “Scent of a Woman,” the 1992 movie that won Pacino his long-overdue Oscar.

Kevin Spacey gave a virtuoso tutorial on how to impersonate the actor whose passionate delivery has helped create some of the most memorable lines in American cinema. The keys are to look surprised and exhale loudly, Spacey said.

Staples’ songs were performed by Elle King, Bonnie Raitt and Andra Day, and actor Don Cheadle spoke about the civil rights legacy of Staples and her family, who were close to the Rev. Martin Luther King Jr. and performed at John F. Kennedy’s inauguration.

The Eagles were originally selected to be honored last year, but the band opted to delay participation because of founding member Glenn Frey’s poor health. Frey died in January at age 67, making the event a bittersweet one for the surviving Eagles, who were joined by Frey’s widow, Cindy Frey. Henley has said the band will never perform again. Bob Seger, Vince Gill and Kings of Leon performed the Eagles’ music Sunday.

“I want to dedicate this evening to our brother Glenn,” Henley said as the band accepted its honors Saturday night at the State Department. “He was so much a part of our success. He was the driving force in this band. He believed in the American dream.”

The band’s longtime manager, Irving Azoff, sobbed as he raised a glass to Frey.

“For our Eagles family,” he said, “2016 couldn’t have had a harder beginning or a more appropriate ending.”