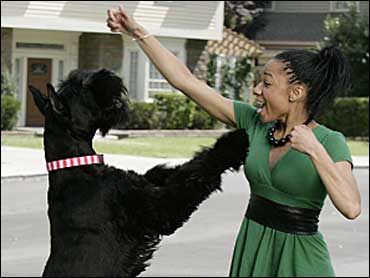 For the past couple of weeks the fur has been flying on CBS' new reality show, "The Greatest American Dog."

The dogs and their owners all live together and are competing for $250,000.

Thursday night Elan Hagens and her giant schnauzer Kenji, were the second team to be kicked off the show.

"I love the show and the concept of it," Hagens told Early Show co-anchor Maggie Rodriguez. "Ideally it's supposed to be judged on the relationship between owner and dog."

Despite the loss, Hagen is still very proud of Kenji.

"Just because your dog doesn't know the best tricks does not mean you don't have a good relationship with your animal," she said. "No matter what, we have the most awesome relationship and everybody out there knows she is the sweetest dog in America."

Thursday night, Kenji had to sit still in a restaurant with her favorite food around her and she blew it. The judges said Hagens was too harsh with her.

"First of all, I was not harsh. My dog is not ten years old and not a Frisbee performing dog," she said. "She's 13 months old. She did awesome for her age and I couldn't be any happier with her performance."