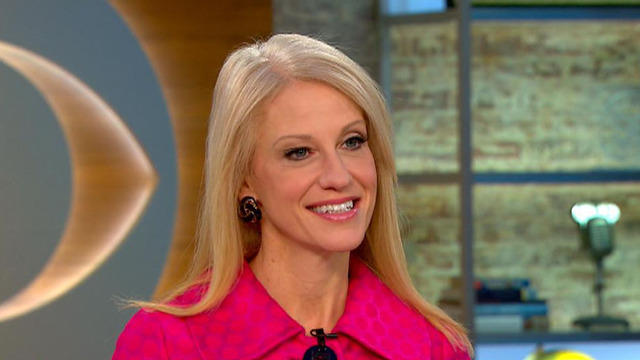 On the day President-elect Donald Trump will gather with the first foreign head of state since his election victory, top senior adviser Kellyanne Conway joined “CBS This Morning” and gave a preview of the meeting, to be held with Japanese Prime Minister Shinzo Abe.

“I think any deeper conversations about policy and the relationship between Japan and the United States will have to wait until after the inauguration,” Conway said Thursday when asked whether Mr. Trump and Abe would discuss the businessman’s campaign trail promises to make Japan pay for its own defense.

“Maybe they’ll discuss that today,” she added, but went on to say that it would be a “much more informal meeting than all of that since we have a current president and commander-in-chief.”

Conway weighed in on other news of the Trump transition team, including Mr. Trump’s son-in-law, Jared Kushner, who was reportedly seeking national security clearance earlier this week.

“He obviously is incredibly important to his father-in-law President-Elect Trump and was [a] big part of our election victory, frankly,” she said. “I’m sure that he and his wife and her brothers will continue to be very supportive. But time will tell in terms of the positions that different people fill.”

The Trump adviser denied that Kushner was seeking top security clearances, and, she said, “he has not applied for any job” with the incoming administration.

On other names floated for Cabinet positions, Conway discussed the possibility of the secretary of state post getting filled by South Carolina Gov. Nikki Haley, once a vocal critic of Mr. Trump’s rhetoric on the campaign trail.

“It would probably be irresponsible to go ahead and name all the people right at once,” Conway said. “But we’re very happy that Governor Haley is coming to meet with President-elect Trump. I’m sure they’ll have a broad-- a wide ranging conversation.”

On Rudy Giuliani as another contender to head up the State Department, Conway said he was a “leading” candidate for “any number” of positions.

“He’s incredibly loyal to Donald Trump. He was very important during the campaign,” she said, before dismissing the reports of his business connections to foreign countries like Venezuela, Qatar and Iranian exiles.

“I understand that people want to vet things publicly,” she said. “But, again, we have a process that should be respected.”

She defended Giuliani further, saying “if he were the secretary of state, he would command a certain presence worldwide. But I think he’s -- he’s qualified for many different positions.”

Of Steve Bannon, Mr. Trump’s controversial chief strategist and right-hand man in the new administration, Conway vouched for him as well.

“He’s brilliant,” she said, pushing back against reports of anti-Semitic and misogynist statements from the former head of the alt-right news website, Breitbart. “He treats everyone kindly and the same. And I think people are cherry-picking some -- some headlines and maybe even some projects that he was not -- he was not involved with.”

Conway also discussed her possible role in the next administration, which she says she has been asked about but has yet to decide on.

“I am still sorting that out. I have four small children...And I need to really balance the personal considerations with the professional ones,” Conway said. “I was asked immediately what I would like to do, yes.”

"Ali" aims for a "real" portrait of the boxing legend