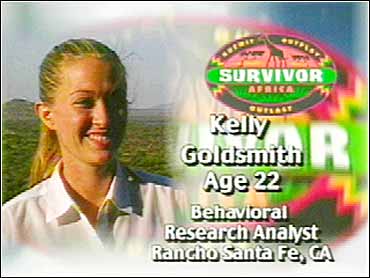 Thursday's installment of Survivor: Africa demonstrated that not even the truth can set you free in a game that thrives on deception.

Under the mistaken idea that she had cast a vote against him in the previous tribal council, tattooed Lex led a coalition against fellow Boran tribe member Kelly. He had a "gut feeling" that she was the traitor. In reality, it was Teresa who had cast the vote. But, aided by swing vote Brandon, Kelly ultimately was the latest loser.

Kelly told Jane Clayson of The Early Show that she "was sad to leave. I had so much fun out there." But she admitted the last three days weren't so much fun.

Clayson said that she had expected a diatribe once Kelly had been voted off.

Kelly admitted that she was shocked and surprised at getting voted off. "I was so shocked. I was very surprised. Because I really thought the four old Samburus were on my side and I thought we were going to ... even that upset me. I was sad that Boran didn't believe me and didn't believe the truth."

Clayson wanted to know what happened.

"There was a defector in the group, young Brandon," said Kelly. "But he's playing his own game and it's cool. No rules in Survivor."

She went on to talk about Lex.

"Lex. Grand master Lex. Yeah, he is a decent human being. I don't want to say anything negative about him. In reality, not reality TV, but in the real world he's a nice guy, good dad, whatnot, but the game does bring out his darker side. He gets that crazy, demonic look in his eye. The snake, cutting off its head. All that was a little creepy. Making me swear on my brother's life. I was kind of uncomfortable with that."

She said she had spoken to him after viewing Thursday's broadcast. "I called him after because he's on the west coast so I saw the show first. And for some reason I thought he looked meaner. So I called him to tell him you look okay and everything's fine and no hard feelings, it's all a game."

Clayson wanted to know if he had apologized.

"No, he didn't apologize," Kelly said. "But, he doesn't have to. Just wanted to let him know that you know, I didn't have anything against him.

"Why do you think he was so convinced that it was you?" Clayson asked.

"To be totally honest, I don't really think he liked me from the beginning. And I don't know why. But that's the game of Survivor, different personality types, we're supposed to clash. Also, Brandon lied to him."

She added, "They didn't air it, but Brandon stayed up all night, spoon-feeding this jargon that he heard me and that. I never said that thing about being a free agent. He just made it up. Kudos to Brandon for creative strategy, I guess. Whatever."

She went on, "I'm the biggest Survivor fan, when crazy stuff happens, even though I ended up on the chopping block, drama like that is fabulous."

Asked about her future, Kelly said, "I'm very excited about the whirlwind that's about to come. I can't wait. I just graduated from college and a day after graduation was my first Survivor interview. And since then it's just been crazy."

Clayson wanted to know if "other survivors warn you about all this? Sort of prepare you for what's to come?"

"No, not really," Kelly said. "I don't really know what happens next. But I'm trying to embrace unpredictability. I learned that in the game and I'm going to try to continue it on in my life."

She said that the biggest surprise so far was getting on the game - and then getting kicked off.

Kelly was asked if she knew who had won the game.

"Maybe I do, maybe I don't." And she jokingly added that if she were to tell, CBS would take her firstborn child.

She went on talk about some of the other castaways.

"Kim Johnson is interesting because it didn't get much play in this episode. But she and I were very, very close. Even with the split. We did the hand signal thing and I still love this lady. She's a great lady. Very strong. Really inspirational. All the stuff she's done. She's 57. She's on Survivor. But it did bum me out a lot that she would not hear any of it when I came to her. Because when it was her head potentially on the chopping block, I really had her back. And that was the only reason I started making alliances with Clarence was to try to get her to stay. I love Clarence, too."

Clayson noted that Johnson had said she was one of the three people that she liked least on the show.

"That was the day I left," Kelly responded. "I went up to her and said, 'Kim, the whole time we've had an alliance.' It was supposed to be me and her until the end. I went up to her and I said, you know, 'I can tell something's wrong. Will you just let me know? You know, what are you thinking?' And she said three people and I don't like the way they're playing the game and you're one of them and I don't know who I'm going to vote for. Even until the bitter end I wasn't going to vote against Lex. I wasn't going to vote against anyone on old Boran because I was very true to my alliance. And I said forget that."

Clayson wanted to hear about her strategy for playing the game.

"Really, I played it like a numbers game. I will admit that it's my bad habit but we watch Survivor religiously in my family and analyze every episode to the point of ridiculousness and my strategy was really, if possible, the second you get there get in a five-person alliance and then within that a three-person alliance and obviously you'd be the coolest person and you'd be the winner. And then day two Lex approached meJonathan and Ethan about a four-person alliance. I was ecstatic. This is it, we're taking it to the end. I've got it made, got my alliance, yeah! And you know. Then we all know that didn't work out. But it's a people game."

And finally, Kelly was asked, "What was the best moment if any, that you had participating in this game?"

She didn't even pause. "Oh, this is easy. The best moment was the boulder challenge when we won. And I'll admit I wasn't the biggest pusher of the boulder, I was more of an over there guider of the boulder. But that was so much fun because Boran had been losing so much. Thought we were going into the merge 2-8. There were people falling. I was rolled over by the boulder and creamed. And then I heard Carl say keep going! Run her over! These people were mean. But I loved it. It was great for Boran. It really brought up our spirits."