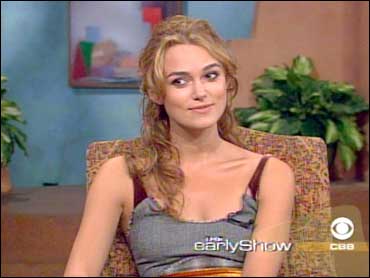 Keira Knightley is best known for her adventurous roles in films like "Pirates Of The Caribbean," "Bend It Like Beckham," and "King Arthur." Now she tackles one of the most romantic tales of all time, Jane Austen's "Pride & Prejudice."

A fan of Austen's work since she was 7-years-old, Knightley was keenly aware of the pitfalls inherent in playing such a longstanding heroine as Elizabeth Bennet.

She was also not the actress for the role in director Joe Wright's mind.

"He said I was too pretty, which is quite a nice way to turn somebody down," Knightley says with a big smile.

But soon after, Wright changed his mind.

"He took one look at me and said, 'Oh, no, you're fine,' " she says. "I'm not quite sure how to take that. He came over when I was doing something called, 'The Jacket,' in Montreal, and it was very cold over there, and I think I was sitting in a bar having a beer or something, maybe not looking that great."

As Lizzie, Knightley is one of five sisters who have been raised well-aware of their mother's (two-time Academy Award nominee Brenda Blethyn) fixation on finding them husbands and securing set futures. Lizzie, however, strives to live her life with a broader perspective, as encouraged by her doting father (two-time Golden Globe Award winner Donald Sutherland). But then she meets Mr. Darcy (Matthew Macfadyen).

"Initially, we absolutely hate each other, or I hate him," Kneightley says. "I think he's stuck up, and he just thinks I'm slightly ridiculous and not pretty enough. Then he finds that we made a complete mistake, and hopefully they fall in love and live happily ever after."

"In today's cinema," she says, "it's fantastic, but we go for very pretty guys. And Matthew is a big bloke and really manly and just desperately romantic. He is completely irresistible."

Currently, Knightley is filming the second and third sequels of "Pirates of the Caribbean," in the Bahamas. But, she says, she is not giving anything away about the story.

Describing the production, she says: "It's long. It's like a really big puzzle. And you know it's going to be good at the end, but it just really takes a long time to put it all together. We started in February and I expect it won't be properly finished until next October. People are so excited about it. But I'm not giving anything away."

Some Facts About Keira Knightley