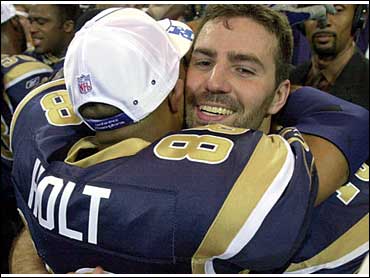 Kurt Warner often totes a Bible instead of a playbook when he takes the podium after games.

The St. Louis quarterback isn't alone in his religious fervor. His favorite target, wide receiver Isaac Bruce, is nicknamed “Reverend Ike” because, when his playing days are over, he wants to be a minister — like his mother — in the Church of God and Christ.

Prayer circles are nothing new in athletic circles. The New England Patriots have them, too, though they're not as vocal about their religious beliefs as their Super Bowl opponents.

The one exception might be wide receiver David Patten.

“If you put God first, nothing is too hard,” Patten said earlier this week. “This whole trip, I'm going to praise God, because I know that it's by Him that I'm here.”

Indeed, religion and the brutal world of football do mix for some teams, but especially for the Rams.

Although coach Mike Martz never quotes scripture, he believes the presence of so many religious players is a team strength, promoting unity. The Rams even hired former defensive lineman Ray Agnew, who retired after last year, as team chaplain.

“And I think that's how everybody on the team looks at it, whether they're involved or not,” Martz said. “It's a personal issue and they allow them that space, so to speak.”

Cornerback Aeneas Williams already is a licensed minister. Defensive coordinator Lovie Smith refers to himself as a Christian man. Religion is what tight end Ernie Conwell insists kept him going during his grueling rehabilitation from reconstructive knee surgery.

Two years ago, when he was a reserve at the Super Bowl, Conwell said he felt a spiritual presence that brought him to tears.

“I just thought God had spoken to my spirit in that he wasn't through with me in this game,” Conwell said. “To stand on the sidelines in that game and the national anthem, God's presence just overwhelmed me.”

When Bruce blew out a tire in a 1999 accident, rolling his Mercedes Benz at 70 mph, he said he knew he would be unharmed because he shouted “Jesus!” as the car began to spin.

Recently, he was certain he would be unaffected by a flu epidemic sweeping the locker room, citing scripture as proof.

Warner effortlessly slips “God” and “Lord” into sentences about recovering from an injury.

Bruised vocal cords kept Warner from speaking when he won the NFL Most Valuable Player award. So he typed his thoughts, liberally sprinkling in his beliefs. He also said consulting with the likes of Willliams, Agnew, Conwell and linebacker Don Davis helped him recover from that injury and the bruised ribs.

“All of those guys have been instrumental in keeping that faith up,” he said.

When Eagles defensive back Damon Moore was injured in the second half of the NFC championship game, Warner and Conwell — members of the same church and roommates on the road — nelt nearby in prayer.

Offensive guard Adam Timmerman said he prays before every game.

“It keeps me focused,” he said. “I don't get sidetracked by things I don't need to be thinking about or doing.”

Talking about religion can be a potential turnoff for some players, but Warner said it would never be allowed to become a barrier. More likely, he said, it's a binding factor because so many players meet for prayer every morning and attend church together.

“It never alienates people because everybody is sincere,” he said. “I do think the faith-based part of it really has brought this team together.

“I think there's no question it adds to the chemistry we've got here.”

Written By R.B. FALLSTROM © MMII The Associated Press. All Rights Reserved. This material may not be published, broadcast, rewritten, or redistributed