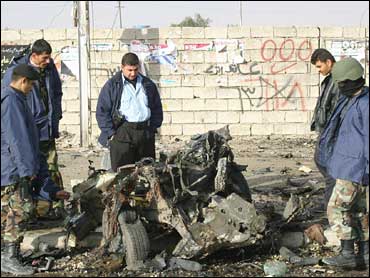 Kurdish leaders have inserted more than 10,000 of their militia members into Iraqi army divisions in northern Iraq to lay the groundwork to swarm south, seize the oil-rich city of Kirkuk and possibly half of Mosul, Iraq's third-largest city, and secure the borders of an independent Kurdistan.

Five days of interviews with Kurdish leaders and troops in the region suggest that U.S. plans to bring unity to Iraq before withdrawing American troops by training and equipping a national army aren't gaining traction. Instead, some troops that are formally under U.S. and Iraqi national command are preparing to protect territory and ethnic and religious interests in the event of Iraq's fragmentation, which many of them think is inevitable.

The soldiers said that while they wore Iraqi army uniforms they still considered themselves members of the Peshmerga -- the Kurdish militia -- and were awaiting orders from Kurdish leaders to break ranks. Many said they wouldn't hesitate to kill their Iraqi army comrades, especially Arabs, if a fight for an independent Kurdistan erupted.

"It doesn't matter if we have to fight the Arabs in our own battalion," said Gabriel Mohammed, a Kurdish soldier in the Iraqi army who was escorting a Knight Ridder reporter through Kirkuk. "Kirkuk will be ours."

The Kurds have readied their troops not only because they have long yearned to establish an independent state, but also because their leaders expect Iraq to disintegrate, senior leaders in the Peshmerga told Knight Ridder.

The Kurds are mostly secular Sunni Muslims and belong to two distinct ethnic groups that date their animosity to the seventh century. Their members predominantly share a belief in Islam but speak different languages, trace their origins to different geographic locations and have different customs.

Kurds have inhabited northeastern Iraq, northwestern Iran and parts of present-day Turkey, Syria and Armenia for centuries. They lived largely autonomously until the seventh century, when Arabs from the Arabian Peninsula conquered them. The Kurds maintained their separate identity, however, despite subsequent conquests by Mongols in the 13th to 15th centuries and by the Ottoman Empire at the end of World War I.

The Kurdish strategy mirrors that of Shiite Muslim parties in southern Iraq, which have stocked Iraqi army and police units with members of their own militias and have maintained a separate militia presence throughout Iraq's central and southern provinces.

The militias now are illegal under Iraqi law but operate openly in many areas. Peshmerga leaders said in interviews that they expected the Shiites to create a semi-autonomous and then independent state in the south, as they would do in the north.

The Bush administration -- and Iraq's neighbors -- oppose the nation's fragmentation, fearing that it could lead to regional collapse. To keep Iraq together, the United States plans to withdraw significant numbers of American troops in 2006 will depend on turning U.S.-trained Kurdish and Shiite militiamen into a national army.

The interviews with Kurdish troops, however, suggested that as the American military transfers more bases and areas of control to Iraqi units, it may be handing the nation to militias that are bent more on advancing ethnic and religious interests than on defeating the insurgency and preserving national unity.

A U.S. military officer in Baghdad with knowledge of Iraqi army operations said he was frustrated to hear of the Iraqi soldiers' comments but that he had seen no reports suggesting that they had acted improperly in the field.

"There's talk and there's acts, and their actions are that they follow the orders of the Iraqi chain of command and they secure their sectors well," the U.S. officer said.

American military officials have said they're trying to get a broader mix of sects in the Iraqi units.

However, Col. Talib Naji, a Kurd serving in the Iraqi army on the edge of Kirkuk, said he would resist any attempts to dilute the Kurdish presence in his brigade.

"The Ministry of Defense recently sent me 150 Arab soldiers from the south," Naji said. "After two weeks of service, we sent them away. We did not accept them."

One key to the Kurds' plan for independence is securing control of Kirkuk, the seat of a province that holds some of Iraq's largest oil fields. Should the Kurds push for independence, Kirkuk and its oil would be a key economic engine.

The city's Kurdish population was driven out by former Sunni Arab dictator Saddam Hussein, whose "Arabization" program paid thousands of Arab families to move there and replace recently deported or murdered Kurds.

"Kirkuk is Kurdistan; it does not belong to the Arabs," Hamid Afandi, the minister of Peshmerga for the Kurdistan Democratic Party, one of the two major Kurdish groups, said. "If we can resolve this by talking, fine, but if not, then we will resolve it by fighting."

The Kurds are related ethnically to Iranians and their language is akin to the Indo-Iranian languages spoken today in Iran, Afghanistan, Pakistan and Central Asia.

The Kurds were promised an independent state in one treaty dissolving the Ottoman Empire at the end of World War I, but a Kurdish state was not mentioned in a later treaty. They have revolted at various times against Turkish and Iraqi governments in an effort to establish their own country.

Arabs trace their origin to the Arabian Peninsula, which has Saudi Arabia as the largest country. During the sixth and seventh centuries, Arabs pushed out of the peninsula and established a huge empire that eventually included Sicily and southern Spain as well as North Africa and much of the Middle East. The Arab empire declined with the rise of the Turks in the 11th and 13th centuries.