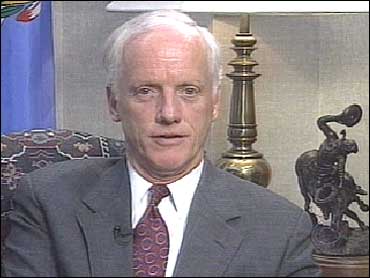 Even as he resigned as head of a panel keeping tabs on the U.S. Roman Catholic hierarchy's sex abuse reforms, former Oklahoma Gov. Frank Keating had defiant parting shots for some bishops.

"To act like La Cosa Nostra and hide and suppress, I think, is very unhealthy," he said Monday.

"To resist grand jury subpoenas, to suppress the names of offending clerics, to deny, to obfuscate, to explain away; that is the model of a criminal organization, not my church," the former FBI agent and federal prosecutor said.

Keating had been criticized by Los Angeles Cardinal Roger Mahony — and by fellow members of the National Review Board — for comments comparing secretive bishops with the mafia. Keating insisted in his resignation letter that those remarks "were deadly accurate. I make no apology."

Keating said Mahony listens "too much to his lawyer and not enough to his heart."

He added, however, that "most of America's bishops are fully supportive" of the board he chaired the past year and "have stood up for virtue."

The panel of 13 prominent lay Catholics was established by the bishops themselves to keep track of their efforts to rid the priesthood of sexual molesters. The former governor said that, frequently, his service was "an agony."

"We share his frustration," Los Angeles District Attorney Steve Cooley told CBS News. He said Mahony and his lawyers have refused for months to open up files that would help convict abusive priests.

"Cardinal Mahony a year or so ago suggested their approach: we want to get everything out," Cooley said. "Well, it hasn't come out yet."

Keating and the other members were appointed by Bishop Wilton Gregory, president of the U.S. hierarchy, who received Keating's resignation by fax Monday.

Gregory responded with a polite note of thanks, saying that the "intense environment" of the scandals "gives rise to strong emotions under the close observations of the media" and "there were bound to be moments of difficulty."

Keating's departure — effective this week just as the full hierarchy meets in St. Louis beginning Thursday — puts pressure on both the bishops and the review board to maintain the lay group's image of full independence.

Board members are vowing to stay vigilant and say Keating's departure won't affect any plans.

Ten of the 12 continuing members of the board held a conference call Monday to discuss the situation. Keating did not participate and declined an interview request.

The board agreed that Vice Chair Anne Burke, an Illinois appellate judge, will take charge temporarily until Gregory appoints the next leader. Observers expect Gregory to pick someone already on the panel.

Board members said their work would continue.

"This idea that somehow there is a backing away could not be more inaccurate," said board member Jane Chiles, retired director of the Kentucky Catholic Conference.

"We will be every bit as tenacious as ever, but there will be a style about it that we hope will elicit support rather than repel."

Board member Robert Bennett, a Washington lawyer, said Keating's resignation is "his own decision, after consultation with the board. This is not a Cardinal Mahony move."

Bennett, who is leading the board's research on what caused the clerical sex abuse crisis, said a change in leaders "will not interfere in the slightest with the work of the board or the determination to hold accountable those who should be held accountable."

Yet conservative layman Philip Lawler, who runs the Catholic World News Web site, said the resignation is another headache for the church. "One way or the other, the man in charge of the investigation is out and complaining he couldn't get his job done," he said.

Survivors Network of those Abused by Priests, long sharply critical of the bishops, said that if a lay Catholic of Keating's "prominence, skills and credentials can be forced out by a few thin-skinned bishops, it's hard to be optimistic about the sincerity of church leaders."

Keating's complaints followed the decision of California's bishops, led by Mahony, not to participate in the board's statistical survey of dioceses on the "nature and scope" of the abuse crisis.

Apparently, the Californians' problems are being resolved, but four board members and researchers will confer with the full hierarchy at a closed-door session in St. Louis.

Paul McHugh, a board member and former psychiatry director at Johns Hopkins University, said he has conducted many surveys and such concerns about questionnaires are routine.

"To believe those questions registered by the bishops, their aides and lawyers were bad faith questions ... represents a lack of experience on the part of people like Frank Keating," McHugh said.