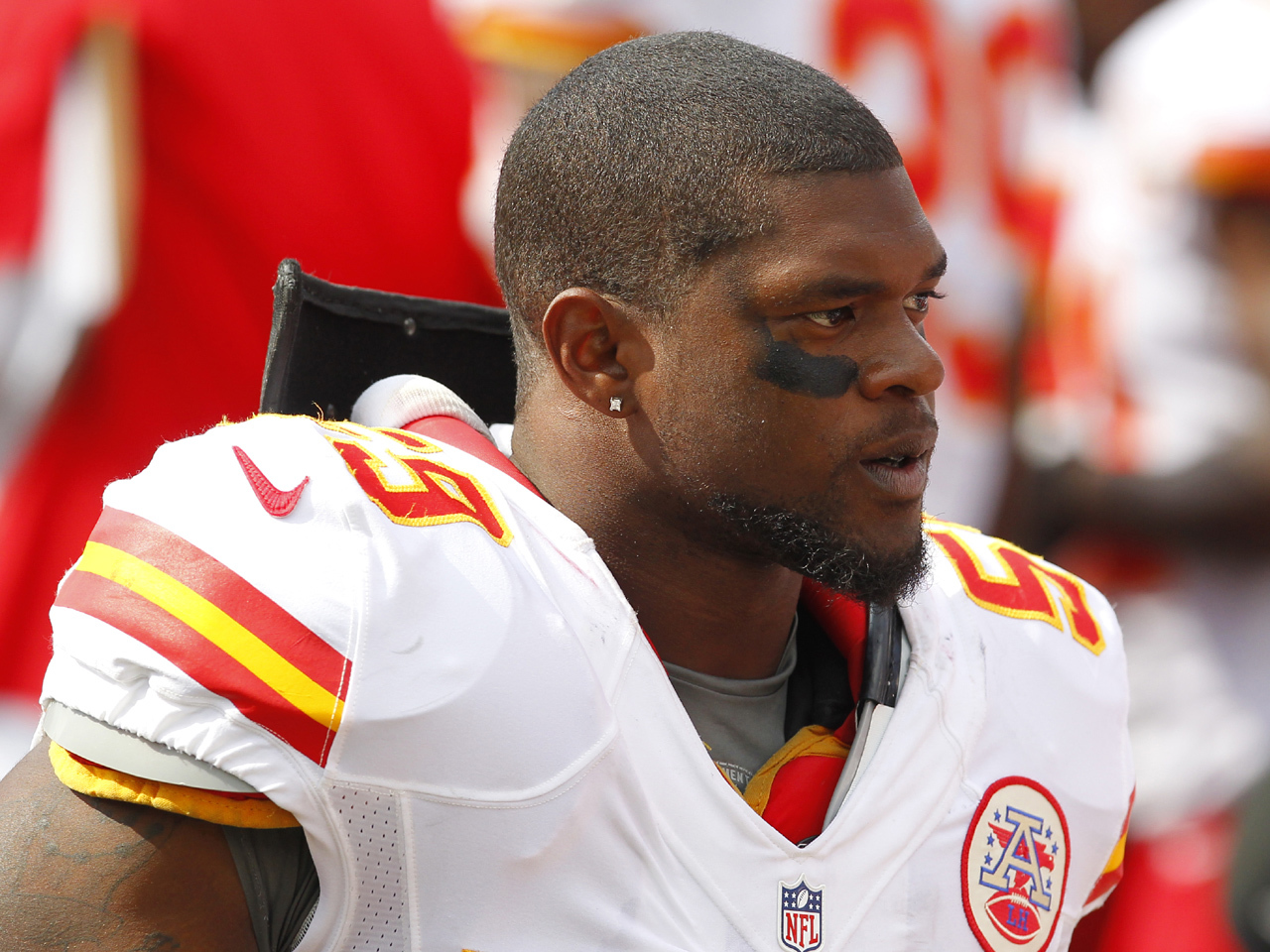 Authorities did not release a possible motive for the murder-suicide, though police said that Belcher and his girlfriend, 22-year-old Kasandra M. Perkins, had been arguing recently. The two of them have a 3-month-old child.

Belcher thanked general manager Scott Pioli and coach Romeo Crennel before shooting himself in the parking lot of the team's practice facility, police spokesman Darin Snapp said. Police had locked it down by mid-morning and reporters were confined to the street just outside the gates.

The Chiefs were scheduled to play the Carolina Panthers on Sunday at Arrowhead Stadium. The Panthers were advised by the league to travel to Kansas City as planned, though no official announcement on the game itself had been made.

Belcher was a 25-year-old native of West Babylon, N.Y., on Long Island, who played college ball at Maine. He signed with the Chiefs as an undrafted free agent, made the team and stayed with it for four years, moving into the starting lineup. He'd played in all 11 games this season.

"The entire Chiefs family is deeply saddened by today's events, and our collective hearts are heavy with sympathy, thoughts and prayers for the families and friends affected by this unthinkable tragedy," Chiefs chairman Clark Hunt said in a statement.

"We sincerely appreciate the expressions of sympathy and support we have received from so many in the Kansas City and NFL communities, and ask for continued prayers for the loved ones of those impacted," Hunt said. "We will continue to fully cooperate with the authorities and work to ensure that the appropriate counseling resources are available to all members of the organization."

The NFL released a statement that also expressed sympathy and said, "we have connected the Chiefs with our national team of professional counselors to support both the team and the families of those affected. We will continue to provide assistance in any way that we can."

Authorities reported receiving a call Saturday morning from a woman who said her daughter had been shot multiple times at a residence about five miles away from the Arrowhead complex. The call actually came from Belcher's mother, who referred to the victim as her daughter, leading to some initial confusion, police said.

"She treated Kasandra like a daughter," Snapp explained. Belcher's mother, who is from New York, had recently moved in with the couple, "probably to help out with the baby," Snapp said.

Police then received a phone call from the Chiefs' training facility.

"The description matched the suspect description from that other address. We kind of knew what we were dealing with," Snapp said. The player was "holding a gun to his head" as he stood in front of the front doors of the practice facility.

"And there were Pioli and Crennel and another coach or employee was standing outside and appeared to be talking to him. It appeared they were talking to the suspect," Snapp said. "The suspect began to walk in the opposite direction of the coaches and the officers and that's when they heard the gunshot. It appears he took his own life."

The coaches told police they never felt in any danger, Snapp said.

"They said the player was actually thanking them for everything they'd done for him," he said. "They were just talking to him and he was thanking them and everything. That's when he walked away and shot himself."

At Belcher's mother's home on Long Island, relatives declined to talk to reporters. A purple SUV in the home's driveway was flying a small Kansas City Chiefs flag.

Belcher is the latest among several players and NFL retirees to die from self-inflicted gunshot wounds in the past couple of years. The death of the beloved star Junior Seau, who shot himself in the chest in at his California home last May, sent shockwaves around the league. Seau's family, like those of other suicide victims, has donated brain tissue from the linebacker's body for research to determine if head injuries he sustained playing football might be linked to his death.

Kansas City Mayor Sly James said that he spoke to Pioli after the shooting, and while he refused to discuss the GM's emotional state, the mayor said Pioli was "extremely concerned that fans of this team are not disappointed and not left in the cold."

The season has been a massive disappointment for the Chiefs, who were expected to contend for the AFC West title. They're just 1-10 and mired in an eight-game losing streak marked by injuries, poor play and fan upheaval, with calls for Pioli and Crennel to be fired.

The Twitter account for a fan group known as "Save Our Chiefs" recently surpassed 80,000 followers, about 17,000 more than the announced crowd at a recent game.

"His move to the NFL was in keeping with his dreams," says Cosgrove. "This is an indescribably horrible tragedy."