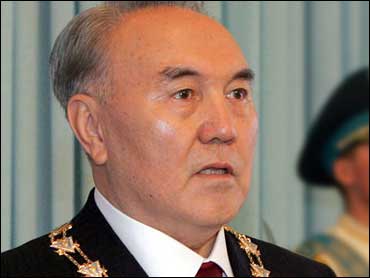 This story was written by CBSNews.com's Jennifer Hoar

Contrary to what you might have heard from a certain hirsute, socially indecorous, verbally impulsive "reporter" from Kazakhstan named Borat, the former Soviet republic of Kazakhstan is not a hub of misogyny and anti-Semitism.

"It is impossible to imagine the country with the things he describes," says Kazakh Embassy spokesman Roman Vassilenko. For one, "women have equal rights with men," he says.

For those who have been under a pop culture crater, Borat is one of the characters played by actor Sacha Baron Cohen, aka Ali G, in his hit series that began running on HBO in 2003 and on Channel 4 in the U.K. in 2000. Borat's latest antics are feature film-ready in the upcoming "Borat: Cultural Learnings of America for Make Benefit Glorious Nation of Kazakhstan."

For as much as Borat has received comedic acclaim on both sides of The Pond, he has been an inflammatory point for the Kazakh government. An oil and gas-rich nation of Central Asia that is looking to become a bigger player on the world stage, Kazakhstan does not want as its unofficial spokesperson someone who depicts the country as a primitive potentate while promiscuously perpetrating all manner of social faux pas.

This concern is particularly pronounced as Kazakh President Nursultan Nazarbayev visits the United States this week — he meets with President Bush on Friday. While Borat and his influence upon American perception of Kazakhstan will not figure into the leaders' agenda, per se, the Kazakh government has launched a PR campaign to disabuse the public of any false notions propagated by the self-appointed mustached mouthpiece.

Vassilenko says the Borat issue is not the central motivation behind this week's slew of ads promoting Kazakhstan in U.S. newspapers. However, the controversy he has created is not being overlooked, either.

"To make sure the joke is lost on nobody, we want to tell the [American] people about the real Kazakhstan," Vassilenko says. The controversy associated with Borat, he concedes, "is making the PR campaign more worth it."

To that end, in advance of Nazarbayev's meeting at the White House, Kazakhstan has run four-page ads in Foreign Affairs magazine and The New York Times, as well as others in U.S. News & World Reports and the International Herald Tribune. Actually, calling them "ads" doesn't do them justice. They are primers-cum-propaganda about this little-known country and its demographics, economic development, religious landscape and democratic government.

A Tuesday corner ad on an op-ed page touted Kazakhstan as a place where you can find "mosques, Russian Orthodox and Roman Catholic churches, and synagogues" with corresponding pictures of same.

Apropos of Nazarbayev's sit-down with Mr. Bush at the White House, the Times ad features a 2001 photo of the leaders cordially greeting each other, accompanied by an "article" about Kazakhstan's economic and military partnerships with the United States.

"Kazakhstan has troops in Iraq," Vassilenko notes, and "it is the only Muslim-majority country to do so."

While the ads' portrayal of Kazakhstan and its relationship with the United States is certainly more factually based than Borat's, some experts on Kazakhstan and affiliates of the Kazakh opposition party take issue with the campaign's rosy perspective — and wonder what it is trying to accomplish in the first place.

"People dealing with Central Asia are not at all persuaded by them," says Georgetown University professor Thomas Melia, deputy executive director of Freedom House, a human rights organization.

This is because, Melia says, those who study Kazakhstan consider Nazarbayev a corrupt dictator and know that government abuses are commonplace. Consequently, the pointed promotion of the supposed "good things happening there" is actually a "point of derision among knowledgeable readers," Melia says.

"They're essentially putting out an ad that the country is a dictatorship," Melia explains, "because real democracies don't need to do that [sort of campaign]."

Freedom House, Human Rights Watch and other advocacy groups have expressed grave concerns about the Kazakh government's abuses of its people's fundamental rights and freedoms of speech and the press. In 2001, a State Department human rights report cited President Nazarbayev's improper treatment of a former Prime Minister and his associates, as well as members of the democratic opposition.

That same year, the U.S. Department of Justice investigated "Kazakhgate," by which millions of American dollars were circuitously filtered into the private accounts of various Kazakh political figures.

A source close to the Kazakh opposition party, who works in the United States and spoke on condition of anonymity, says that "in Kazakhstan, opponents of the dictator are being killed and executed." He calls Kazakhstan a society that is both "chauvinistic" and "oppressive."

Because of the rampant corruption there, the best PR "would be for the U.S. to stop spending money on Kazakhstan," he argues.

These claims certainly raise questions as to why the Bush administration is engaging Nazarbayev diplomatically.

"The President has said that freedom really is at the heart of the administration's agenda," White House Press Secretary Tony Snow told reporters today, "if history is any guide, it will come up" in the meeting between Mr. Bush and Nazarbayev.

"In the process of embracing a conspicuous dictator, [the Bush administration is] undermining the promotion of democracy," he says.

Mr. Bush's meeting with a Kazakh official also may complicate U.S. relations with other countries, most notably Russia, Melia believes, which "sees as hypocritical our embrace of Kazakhstan."

This divisiveness helps to explain why Borat's antics, and the way they have been received, have been a source of consternation for the Kazakh government.

Dr. Martha Olcott of the Carnegie Endowment for Peace and an expert on Kazakhstan, said the opposition party has, in a way, used the Borat depiction of Kazakhstan as material against Nazarbayev's government. In fact, it appears to have become such a "political football" that Olcott says she is sent copies of the "Ali G Show" by the opposition party.

Olcott has even speculated that Sacha Baron Cohen "may have gotten encouragement from the opposition party," possibly even with money, to negatively portray Kazakhstan the way he does through Borat.

Whatever might have been behind the conception of the Borat character, the show is very evidently a satire, its star a hyperbole. The only problem is that when given the choice to ignore it or laugh at it, the Kazakh government did neither.