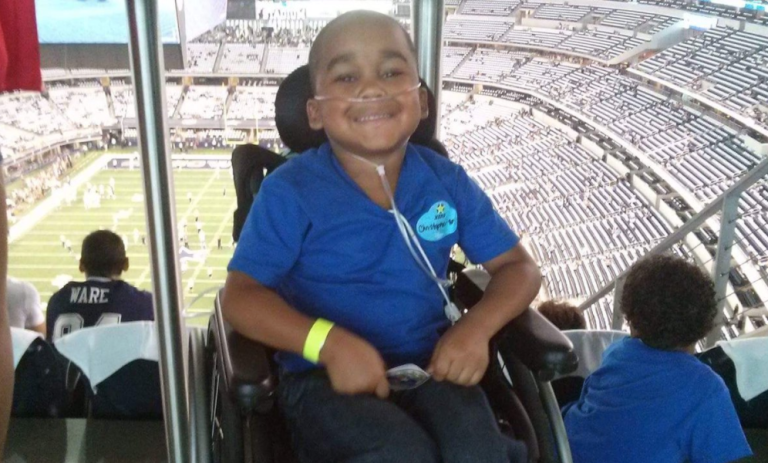 DALLAS – An 8-year-old Dallas boy may have endured more than 300 unnecessary doctor visits, gone through more than a dozen pointless surgeries and suffered life-threatening treatment complications after police and child protective officials say his mother faked multiple illnesses beginning when he was a newborn.

Kaylene Bowen-Wright is charged with injury to a child and was jailed on $150,000 bond, reported CBS DFW. The child and his two siblings were removed from the home by child welfare officials last month.

An investigation by Child Protective Services (CPS) found Bowen-Wright took her son, Christopher, to hospitals in Dallas and Houston with a variety of complaints, resulting in 323 medical appointments and 13 "major" surgeries, CBS DFW reports. He's been on a feeding tube, confined to a wheelchair, developed a blood infection that landed him in the ICU, and has spent time in hospice care, Dr. Suzanne Dakil wrote in an affidavit provided to the CPS investigator.

The agency's report indicated it was likely a case of Munchausen Syndrome by proxy, where a caregiver fakes or creates a child's symptoms to receive attention, sympathy or other benefits. A CPS investigation also found Bowen-Wright cut her son's hair and posted a picture of him in a Make-A-Wish shirt claiming he had cancer in an effort to raise money.

Ryan Crawford, the boy's father, told the station Bowen-Wright began complaining of their son's health soon after he was born. Crawford said she later surprised him at a custody hearing with claims of serious health issues.

"Saying Christopher is never going to walk and we need to … I need to learn to take care of a disabled child," he said.

"Every single time we went to court, she would say that my son was dying the next day," said Crawford.

Crawford said three different judges believed her claims, refused to grant him custody, and chided him for not taking his son's health seriously.

"No one wanted to believe me until it was almost too late," said Crawford.

In an arrest warrant affidavit obtained by CBS News' Crimesider, police allege the medical abuse began when the boy was just 11 days old in 2009 and continued until he was 8 years old.

According to the Dallas County document, the child was admitted the NICU at Medical City Hospital in Dallas after being born prematurely at 33 weeks in April of 2009, the affidavit says.  Bowen-Wright allegedly poured out milk the boy didn't finish and lied to medical staff that he hadn't taken the entire contents of his bottle, the document says.

Bowen-Wright was then confronted by medical staff, which "began the eight-year cycle of the suspect seeking medical treatement, doctor shopping and providing and/or false information to medical provider that resulted in [the boy] undergoing tests, radiological exams, surgeries, procedures and the introduction of feeding tubes, ports, pic and central lines."

The boy three times developed life-threatening blood infections, a dangerous complication of the central line catheters, which are inserted into a major artery or vein and used to deliver medicine or nutrients over a long period of time, often to seriously ill patients. The child began receiving hospice care for pain management and Bowen-Wright signed a "do not resuscitate" order for the boy when he was five, the affidavit says.

The child was treated in hospice care from 2014 but discharged in April 2015 when Bowen-Wright allegedly wouldn't cooperate with an eight-week medical plan aimed to allow the boy to live without feeding tubes, IV hydration and oxygen, affording him "an opportunity to live somewhat of a normal life."

"The suspect's concern was whether [the boy] could be returned to hospice care following the eight weeks," the affidavit says.

In October of 2015, the boy was again admitted to the ICU for his third life-threatening blood infection related to a central line catheter. Bowen-Wright then complied to have the boy evaluated to be taken off IVs and oxygen and the child was taken off TPN, an intravenous feeding method.

Christopher began eating three meals a day without any issues, was cleared to eat a regular diet without any restrictions and ordered released from the hospital, the affidavit says.

The affidavit says Bowen- Wright, however, didn't comply with medical recommendations after his release. She instead transferred the boy's care to Texas Children's Hospital in Houston, refused to provide records of his previous medical care for his treatment at Children's Health-Children's Medical Center of Dallas, "and the cycle of testing began again," the affidavit says.

Ultimately, doctors at the Texas Children's Hospital found that Bowen-Wright's account of her son's medical issues didn't match his clinical appearance or test results, the affidavit says. Five specialists there wrote that medical child abuse can occur when a caregiver "fabricates or exaggerates an illness in the child to medical providers," and the child can be harmed by unneccesary medical testing and treatment provided based on false information from the caregiver.

"In pediatrics, doctors depend on the parent's reports of sympstoms and make decision[s] based on the information provided by the child's parents," the specialists wrote in a medical assessment quoted in the affidavit.

The medical assessment by staff at Children's Health-Children's Medical Center of Dallas was similar, the affidavit says, reporting Bowen-Wright had been providing different information to different providers, reporting problems that weren't witnessed by doctors, and refusing to comply with recommendations that might result in less medical intervention. Bowen-Wright's "excessive use of the medical system" resulted in numerous procedures including central lines, ports and feeding tubes which resulted in subsequent complications like infections and clots that sometimes required life-saving treatment.

During a trip to Dallas Children's Medical Center in November, a doctor began to suspect Bowen-Wright might be trying to induce her son to have seizures and later documented concerns in a report to CPS, CBS DFW reports.

The complaint prompted the state agency's investigation, which resulted in Christopher and his two siblings being removed from the home Nov. 16.

When the boy was removed from the home, he was on oxygen and had an IV. But when he was interviewed by investigators, the child talked about "playing with his brother, playing on the monkey bars when he went to school, and playing basketball the previous year."

Christopher was admitted to a hospital where he was able to eat normally and function without oxygen, and IV or a feeding tube. He shows no signs of seizures, choking or fatigue.

"Instead, the [boy] was up and playing most of the time in the hospital," the affidavit says.

He was released into the care of a foster home and has had no medical issues since, the affidavit says.

Red flags of Munchausen Syndrome by proxy include when a parent's story about medical problems don't match what doctors see in the child, clinical psychologist and Stanford associate professor Dr. Mary Sanders told "48 Hours" in 2016 during the broadcast's investigation into New York mother accused of killing her son by administering salt through his feeding tube. Lacey Spears was convicted in 2015 in the death of her son Garnett, who she claimed was severely ill in a series of online blog posts.

"The motives are varied ... but we can assume that the motives are to gain attention to have drama in one's life, excitement," Sanders told "48 Hours."

In addition to the "serious bodily injury" suffered by the victim in the Dallas case, police say he also suffered serious mental impairment "from the suspect continually teaching [the boy] that he is ill and unable to eat in a normal manner, participate in school and life in a normal manner."

Crawford said his son is struggling to accept he may never have been sick at all.

"He almost died three different times due to infections from the 13 different surgeries, so he has a … he has a long road ahead of him," Crawford told the station. "I hate that he had to go through all that. I hate it. I hate it so much."