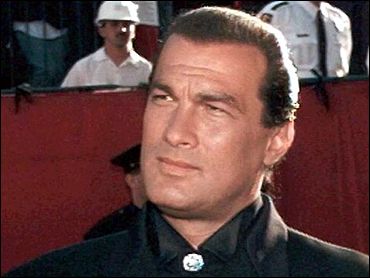 NEW YORK (CBS) Action film star Steven Seagal is being sued for sexual harassment and human trafficking by former model Kayden Nguyen who claims he treated her as a "sex toy."

According to court documents obtained by CBS News, the 23-year-old was hired by Seagal in Feb. 2010 as an executive assistant at his production company. But she says on the first day on the job, she learned that she was actually signed up to replace one of the two Russian female "attendants" on staff as Seagal's sexual servants, available for his sexual needs 24/7.

Nguyen claims in her lawsuit that on three  occasions Seagal "sexually assaulted" her with forced contact or groping.

The 58-year-old actor, best known for his martial-arts moves in films such as "Under Siege" and "Exit Wounds," responded to the lawsuit through his lawyer.

"The lawsuit filed by Kayden Nguyen against Steven Seagal is a ridiculous and absurd claim by a disgruntled ex-employee who was fired for using illegal narcotics," Seagal's lawyer, Marty Singer said to TMZ.

Nguyen claims she was kept against her will for six days at a secluded Louisiana home where Seagal and his family were allegedly staying. When she finally escaped, she claims Seagal chased after her with a "flashlight with a gun attached to it."

Nguyen's lawyer, William Waldo, told CBS News' Crimesider that Nguyen did not call police because she believed they would listen only to Seagal.

"Mr. Seagal is the police," he said. "She is in a remote area of Jefferson Parish. It is in the middle of nowhere and he is the police."

In addition to his film career, Seagal is a commissioned deputy in the Jefferson Parish Sheriff's department. His cable show, "Steve Seagal Lawman," follows his adventures.

Seagal's lawyer, Marty Singer, did not respond to a request for comment at press time.