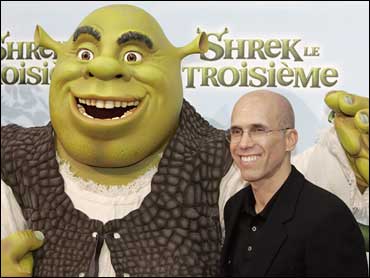 Galvanized by the success of "Shrek the Third," Jeffrey Katzenberg says the tale of the green ogre who married a princess will continue.

Earlier this week Katzenberg told an Australian newspaper that the fourth film will come out in 2010 and the fifth in 2013.

Katzenberg said there will be a half-hour animated TV special, "Shrek the Halls," featuring the Shrek characters' versions of holiday traditions.

As for the plot of the fourth installment of the "Shrek" movie franchise, Katzenberg would only reveal that Shrek will have to come to terms with something difficult in his past.

The DreamWorks animated blockbuster opens in Germany on June 21.

Timberlake, who voices the future King Arthur, said his favorite moment while working on "Shrek the Third" was listening to director Chris Miller do the voices of the animated cast.

"He can actually do every voice," said Timberlake. "He does a pretty good Mike (Myers). He can't do a very good Shrek, but he can do a good Mike doing Shrek, so it was a lot of fun to work with him."