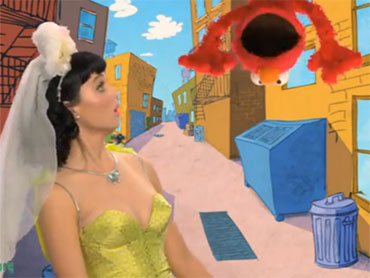 Katy Perry has turned up the heat on "Sesame Street." Recently, the one-time gospel singer taped a seemingly innocent song with Elmo, a child-friendly version of her 2009 hit "Hot 'n Cold." Set to air New Year's Eve, the clip found its way to YouTube, rapidly approaching the million-hit mark. But Perry's low-cut costume has caused an uproar. Soon parents started weighing in on her performance. The clip has garnered 6,000 YouTube comments so far.

"Thank you for speeding up the puberty process," wrote one mom. "You can practically see her ***," wrote another.

Now, the girl who famously kissed a girl won't make be making her "Sesame Street" debut soon. She and Elmo have reportedly had their New Year's party invitation pulled by the show's producers.

The "Early Show" anchors weighed in on Perry's costume.

When Rodriguez said, "You don't think it is a big deal. Do you?" Erica Hill replied, "I don't know."

Hill said, "Looking at her outfit is not that provocative. I think it's a protest against her portfolio of some of her songs."

Rodriguez said, "I'd say not that it is so bad -- but why is it necessary? Can you think of any other star who's gone on 'Sesame Street' who has worn anything like that?"

"Sesame Street" has issued this statement to CBS News:

"Sesame Street has a long history of working with celebrities across all genres, including athletes, actors, musicians and artists. Sesame Street has always been written on two levels, for the child and adult. We use parodies and celebrity segments to interest adults in the show because we know that a child learns best when co-viewing with a parent or care-giver. We also value our viewer's opinions and particularly those of parents. In light of the feedback we've received on the Katy Perry music video which was released on You Tube only, we have decided we will not air the segment on the television broadcast of Sesame Street, which is aimed at preschoolers. Katy Perry fans will still be able to view the video on You Tube."