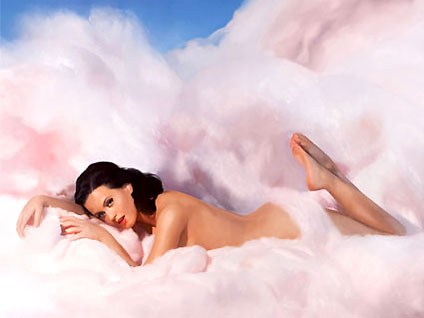 NEW YORK (CBS) Katy Perry is floating on a pink cloud, all in the name of "Teenage Dream."

The "California Gurls" pop star is prepping her upcoming third studio album "Teenage Dream," with the title single just released on radio Friday. The album cover shows a semi-naked Katy Perry nestled in a billowy cloud with just a little piece of cloud strategically placed over her bottom.

Perry has reasons to show off her goodies. In June, Maxim ranked the 25-year-old singer Number 1 in the magazine's annual "Ten Hottest Women Ever" list.

Surprisingly, the album cover is not a photograph, but a painting by Los Angeles-based contemporary artist Will Cotton (who also was creative director behind Perry's colorful "California Gurls" music video).

According to Billboard, Cotton photographed Perry posing in clouds of real cotton candy in his studio. The artist then used those images to create a 6-foot-by-6-foot composite painting that was unveiled live on Ustream for Perry's fans on July 21.

To fully showcase the artwork, Billboard reports that "Teenage Dream" will be released as a Digipak in its first run and printed on cotton candy-scented paper.