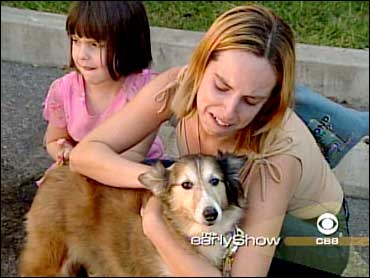 Katrina's wind and water took lives, destroyed homes, and scattered families — including frightened, hungry pets that were left behind in the hurricane's wake.

According to The Early Show's resident veterinarian, Dr. Debbye Turner, thousands of cats and dogs died in Hurricane Katrina. But many pets were rescued and some, like Lassie, an 8-year-old collie, were reunited with grateful owners.

Lassie is more than just the family pet to New Orleans residents, Betty and Russell DeRogers.

"My dogs mean everything to me," Russell DeRogers said. "That's all I got."

With no car, they had no way to get Lassie or their Shih Tzu, Pooh, to safety when Katrina hit. But when the levee broke, their home flooded and the DeRogers were rescued by boat.

"They said, 'No, you can't take the dog,' " and we went to the superdome from there," Russell DeRogers said.

It would be weeks before they found out that Lassie was rescued. On Sept. 30, he was plucked from the high water like thousands of other pets who were left stranded in the storm.

"Some were just standing in the streets," said Laura Maloney, the Louisiana SPCA director. "Some were swimming toward boats. Some were on top of roofs."

Maloney remembers clearly the horror of trying to retrieve dogs and cats that were left to fend for themselves.

"We were not prepared mentally for the devastation," Maloney said. "Military is prepared for combat. And this was very much like a combat zone."

No ones knows for sure, but it is estimated that hundreds of thousands of pets were affected by Katrina. Many died as the result of the storm. Others just waited for someone to come get them. Maloney said the Louisiana SPCA was able to rescue about 50 percent of the animals alive.

A thousand people arrived in New Orleans from around the country to help care for the animals.

"People would tell me they were just watching the television … in their home town and said, 'Oh my God, I'm gonna go down and help." And they would just come down and start helping," Maloney said.

Despite the good intentions, there was little coordination and a great deal of confusion. Maloney said next time they will be better prepared.

"We know what needs to be done, but getting all of the gaps filled, transportation gaps, staffing gaps, credentialing, you know, all of the things that need to happen take time," she said.

"Saving pets equals saving people. Forty-four percent of the people, according to the Frist Institute, stayed behind because of pets," Maloney said. "So if we save pets, the people will be saved, as well."

This time, about 20 percent of the Katrina pets were returned to their original owners.

As for the DeRogers, their beloved Pooh didn't survive the storm. But a month after Katrina's wrath, Betty DeRogers got a phone call from someone she didn't know.

The caller was Lois Lerner, who'd come to New Orleans from Maryland to help rescue pets. She found Lassie and kept him for 10 months until the DeRogers were back on their feet again. In June, Lassie finally came home.

"The stuff that I lost, I'll never get it back. But this having Lassie there means … it's just like I got everything now," Russell DeRogers said.

The DeRogers said that the next time there is a hurricane, they won't hesitate. They will get their dog and leave.