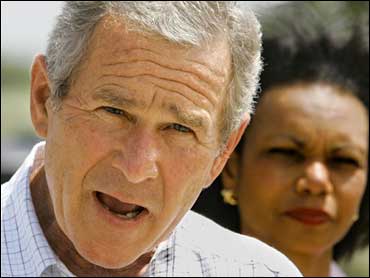 
Now that America needs help, it is refreshing — not to mention unusual — to see the outpouring of international support being offered. Hurricane Katrina has exposed many problems that Americans will have to face up to, including the social and economic consequences of the disaster.

One area that has received little focus is whether the United States, after Katrina, will be seen by friends and foes abroad in the same light when it comes to the country's foreign policy.

Yes, it is nice in a time of need that Israel, which receives more than $2 billion a year from Washington in economic aid, was quick to send an El Al 747 loaded with baby food, infant formula, tents, first aid kits and other supplies. But this is unlikely to have any impact on the government of Ariel Sharon when listening to the Bush administration's admonitions against building more housing in West Bank settlements.

Afghanistan, which continues to receive hundreds of millions in aid each year, pledged $100,000 in cash. That's wonderful but does that mean we'll have to pony up an extra hundred thousand next year? And does it mean the government of Hamid Karzai will work harder to cut opium poppy cultivation?

Secretary of State Condoleezza Rice said it was "particularly heartening" that Sri Lanka, hit by last year's tsunami, sent in $25,000 in cash. For Rice "that says something about the heart of the world as well as the heart of America." Spokesman Sean McCormack, when asked if these countries could afford to make such contributions, said the United States was accepting the offers of support in the spirit they were intended.

Help from other countries continues to pour across our borders. A convoy of Mexican army trucks loaded with relief supplies crossed the border headed for San Antonio. In past disasters, plenty of aid has gone the other direction. While cooperation during this period is welcome, it likely will not have any impact resolving other strains in the U.S.-Mexican relationship. Illegal border crossings and rampant crime along the border will remain subjects for politicians, diplomats and law enforcement officials to work out.

The opportunity to repay America for help offered in the past is seen in the contributions of many of the more than 100 countries and 11 international organizations that have pledged to help Katrina's victims. One of the best examples is Kuwait, which was liberated from Saddam Hussein's Iraq by the United States in the Gulf War. Kuwait pledged $100 million in cash and another $400 million in oil. With Kuwait now being used by American troops going in and out of Iraq, this relationship remains strong.

Notably, offers of help from several countries on the outs with the Bush administration have either been rejected or ignored. Fidel Castro's Cuba offered doctors and other medical aid but Washington has not accepted the help. Iran, whose nuclear ambitions and support for terrorist organizations keeps Tehran on the outs with Washington, offered 10 million barrels of crude oil. The State Department's Harry Thomas Jr., appointed by Rice as the point man to deal with offers of help from abroad, said Iran's offer of aid "was a conditional offer … So we don't deal with that." Apparently, the spirit of these particular offers was not made, well, in the right spirit.

Venezuela's pledge of $1 million through CITGO, an oil company partly owned by the Venezuelan government, was accepted. But other assistance offered from President Hugo Chavez's administration, which is on the outs with Washington, seems more problematic.

North Korea, a country in Mr. Bush's axis of evil, has received a lot of humanitarian food aid from the United States but it has not offered any help, say State Department officials.

Hurricane Katrina clearly exposed America to being vulnerable to Mother Nature. The fact that parts of the Mississippi Gulf Coast look like Indonesia after the tsunami is inescapable.

Less visible is the perception abroad of Washington's handling of the problem. Initial confusion about the government's response and political finger-pointing is being watched in foreign capitals. To the extent others see the Bush administration preoccupied with a domestic crisis of the first order, attitudes toward Washington might well affect upcoming foreign policy challenges.

One early test comes next week when six-party talks are scheduled to resume in Beijing over North Korea's nuclear program. Another, also next week, revolves around the move to reform the United Nations, which celebrates its 60th anniversary this year. Most agree there is a need for change, but a clear consensus on exactly what those changes should be has not yet been achieved.

Rice has challenged Russia, China and India — each offered aid to Katrina's victims — to press Iran on its nuclear program. Their response will be an indicator on how others perceive the strength or weakness of the Bush administration as it deals with a major domestic crisis in addition to a worsening situation in Iraq. When Mr. Bush and Rice are in New York for the U.N. meetings, they will gain a better understanding of how those who wish to test them will try to influence policies Washington cares about very strongly.