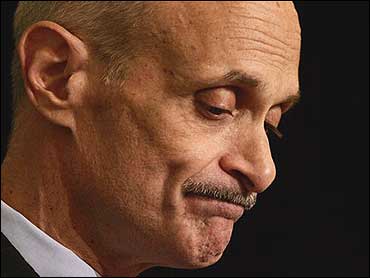 Government at all levels took only an indifferent stance toward disaster preparations after the 2001 terror attacks, leaving the Gulf Coast unnecessarily vulnerable to Hurricane Katrina, a House inquiry has concluded.

Finding fault with the White House down to local officials, the House investigation determined that authorities failed to move quickly to protect people, even when faced with warnings days ahead of the storm last Aug. 29.

The final report, written by a Republican-dominated special House committee, was obtained by The Associated Press on Tuesday night, ahead of its scheduled release Wednesday. Parts of the report were released Sunday.

"Passivity did the most damage," concluded the 520-page report by the committee, chaired by Rep. Tom Davis, R-Va., charged with investigating the sluggish response to Katrina. "The failure of initiative cost lives, prolonged suffering, and left all Americans justifiably concerned our government is no better prepared to protect its people than it was before 9/11, even if we are."

"The preparation for and response to Hurricane Katrina should disturb all Americans," the report said.

The House report is the first to be completed in a series of inquiries by Congress and the Bush administration about the massive failures exposed by Katrina, which left more than 1,300 people dead, tens of thousands homeless and billions of dollars worth of damage in her wake. Despite President Bush's accepting full responsibility for the federal government's shortfalls, the storm response continues to generate finger-pointing.

In Senate testimony last week, former Federal Emergency Management Agency Michael Brown singled out the Homeland Security Department and its chief, Secretary Michael Chertoff, as a muddled bureaucracy that slowed relief to the Gulf Coast. The White House and Homeland Security hit back, describing Brown as a renegade who failed to follow a chain of command.

The House report also finds fault with Chertoff, for failing to activate a national plan to trigger fast relief, and Homeland Security, for overseeing a bare-bones and inexperienced emergency response staff.

It also concludes that Mr. Bush could have speeded the response by becoming involved in the crisis earlier and that he was not receiving guidance from a disaster specialist who would have understood the scope of the storm's destruction.

Meanwhile, a Homeland Security Department analysis shows fewer than half of the 50 states say they are prepared to respond to a catastrophic disaster like Hurricane Katrina and many are still struggling to meet federal guidelines for evacuations.

The Homeland Security analysis, which was ordered by Congress and Mr. Bush, was released as the department has come under fire for its response to Katrina.

White House spokesman Scott McClellan said Mr. Bush has full confidence in Chertoff and has not considered asking him to step down in the wake of the criticism.

However, Senate Democratic Leader Harry Reid, D-Nev., reiterated an earlier call for Chertoff to resign. The recent criticism about Chertoff's performance during Katrina "only adds to my displeasure with our secretary," Reid said.

The Senate committee purposely saved Chertoff for last, reports CBS News correspondent Sharyl Attkisson, who adds that the panel has used the previous hearings to build a Katrina timeline. On Wednesday, the senators plan to grill Chertoff about it and will try to get him to fill in some of the blanks.

The Homeland Security analysis compiles self-assessments by the 50 states, five U.S. territories, the District of Columbia and the nation's 75 largest cities.

In the survey, 47 states reported that their emergency response plans meet federal standards. Two states, West Virginia and Hawaii, said their basic plans do not, while Wyoming did not respond.

Twenty states, including Louisiana, Texas, Florida and Alabama — all of which were slammed by massive hurricanes last year — said they felt confident about their plan to respond to a catastrophe. Fourteen states said they were only somewhat confident, while another 13 reported they were not confident about their plans to manage a catastrophe. Three states, including Mississippi, which was also rocked by Katrina, did not respond.

A spokeswoman for Louisiana Gov. Kathleen Blanco said the state's catastrophic response and evacuation plans were updated after Katrina hit.

"A lot of the lessons were learned before (Hurricane) Rita," Blanco spokeswoman Denise Bottcher said Tuesday. She noted that officials directly called homes and helped those in nursing homes and hospitals get out before the Sept. 24 storm.