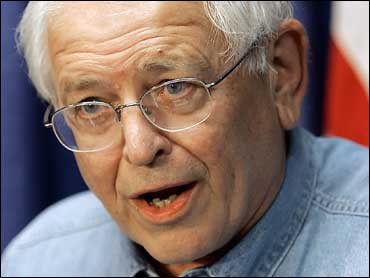 The arrest of two nursing-home owners in the deaths of 34 people marked the beginning of what prosecutors said Wednesday is a large-scale investigation into whether New Orleans-area hospitals and other institutions neglected their patients during Hurricane Katrina's onslaught.

The Louisiana attorney general's office said all of its investigators have been pulled from other tasks to work on the Medicaid Fraud Unit, the team whose work led to homicide charges Tuesday against the husband-and-wife owners of the flooded-out St. Rita's nursing home in Chalmette.

Kris Wartelle, a spokeswoman for Attorney General Charles Foti, said the office is looking into other allegations of neglect that may have led to injuries or deaths at nursing homes and hospitals.

"Reports are flooding in. It just depends on what's legitimate and what is not," Wartelle said Wednesday.

In Washington, meanwhile, Senate Republicans scuttled an attempt by Sen. Hillary Clinton to establish an independent, bipartisan panel patterned after the 9/11 Commission to investigate what went wrong with federal, state and local governments' response to the hurricane.

Louisiana's governor said she is taking "full responsibility" for the failures and missteps in the immediate response to Katrina. Kathleen Blanco said, as governor "the buck stops here" as she told lawmakers in a special meeting of the state legislature, that there were failures at every level of government.

Separately, a Senate committee opened a hearing on the disaster, with the panel's Republican chairwoman saying that changes instituted after Sept. 11 in the government's emergency-preparedness failed their first major test during Katrina.

Meanwhile, CBS News Correspondent Bill Whitaker reports that
people on the Gulf Coast are facing more bad news: When it comes to hurricanes, most homeowner policies cover damage from wind only – not water – so most of the damage caused by Katrina's unprecedented tidal surge is not covered.

State Farm agent Elvis Gates says it hurts him to see customers drowning in mud and debt, but he adds "we can't invent coverage where it doesn't exist, because that wouldn't be fair to everybody who's paid into these policies that doesn't have a hurricane claim."

With billions of dollars to boost disaster preparedness at all levels of government, "we would have expected a sharp, crisp response to this terrible tragedy," said Sen. Susan Collins, R-Maine. "Instead, we witnessed what appeared to be a sluggish initial response."

For Louisiana alone, the death toll surged by more than half Tuesday to 423, and the number is certain to climb. Including deaths in four other states, Katrina's overall toll stood at 659.

"Let me caution everyone: We have not done the secondary searches in the areas where the water was the highest. So we still have a lot of work to do, and those numbers probably will go up," Mayor Ray Nagin said.

Authorities said the toll would be lower if nursing-home owners Salvador and Mable Mangano had heeded warnings to evacuate their patients as Katrina came ashore Aug. 29.

"The pathetic thing in this case was that they were asked if they wanted to move them and they did not," Foti told Early Show co-anchor Harry Smith. "They were warned repeatedly that this storm was coming. In effect, their inaction resulted in the deaths of these people."

The Manganos were released on $50,000 bail each; each of the 34 counts against them carries up to five years in prison. Their attorney, Jim Cobb, said his clients were innocent and had waited for a mandatory evacuation order from the officials of St. Bernard Parish that never came.

The attorney general is also investigating the discovery of more than 40 corpses at flooded-out Memorial Medical Center in New Orleans. A hospital official said the 106-degree heat inside the hospital as the patients waited for days to be evacuated likely contributed to their deaths.

"I'm going to be a man about this. Whatever I did, whatever I could have done better, I'm going to stand up and history will judge me accordingly," Nagin said in an interview broadcast Wednesday.

"But let's make sure that as we analyze what Ray Nagin as mayor did, let's look at what everybody in authority (did) so that this never happens again in this country."

The updated Louisiana death toll was released as Gov. Kathleen Blanco lashed out at the federal government, accusing it of moving too slowly in recovering the bodies. The dead "deserve more respect than they have received," she said.

However, Federal Emergency Management Agency spokesman David Passey said the state asked to take over body recovery last week. "The collection of bodies is not normally a FEMA responsibility," he said.

Not all the news was grim. The New Orleans airport reopened to commercial flights Tuesday, the port resumed operations far earlier than expected, and Nagin said dry sections of the city — including the French Quarter and central business district — could be reopened as early as Monday, provided the Environmental Protection Agency determines the air is safe to breathe.