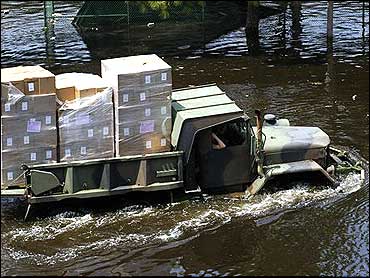 Sewage and chemicals are mixed into a potentially toxic bathtub soaking New Orleans, posing the threat of disease for residents forced to wade in Hurricane Katrina's floodwaters.

"Probably the more immediate health risk to the people is that whatever was in the sewer is in the water," said John Pardue, director of the Louisiana Water Resources Research Institute at Louisiana State University in Baton Rouge. "Whatever bacterial or viral diseases that people put into the system before the flooding is now in the water."

Meanwhile, scientists say they're alarmed by how much of the region's environmental defenses against future hurricanes and other big storms have become seriously compromised. For example, the Barrier Islands, which have prevented strong storm waves from hitting shore in the past, are almost wiped away.

Smaller toxic environments are popping up during rescue efforts in Louisiana and Mississippi. For example, the Superdome became a health hazard for refugees over the past couple days due to broken toilets and air conditioning. The first of hundreds of busloads of people evacuated from the hot and stinking Louisiana Superdome arrived early Thursday at their new temporary home — another sports arena, the Houston Astrodome, 350 miles away.

The military, which was overseeing the removal of the able-bodied by buses, continued the ground evacuation without interruption, said National Guard Lt. Col. Pete Schneider. But Schneider said fires set outside the Superdome were making it difficult for buses to get close enough to pick people up.

Along with the sewage in the floodwater is a witches' brew of chemicals from a variety of sources, including leaking fuels and oils from gas stations and submerged cars, paints and solvents from small businesses and household cleaners and pesticides from peoples' homes.

But the biggest chemical plants and refineries to the south and east of the city were spared a direct hit by the hurricane. If that had happened, breaches in large tanks and other industrial facilities might have spewed heavy petroleum, hydrocarbons and chlorine gas.

"From the perspective of chemical or environmental contamination, it could have been much worse. One advantage is that we have so much water in the city and that dilutes out the chemicals," Pardue said. "People shouldn't have an irrational fear of chemicals in the water. I'm more concerned about the viral and bacterial things. There's going to be a lot of gastrointestinal and public health issues."
Although it may seem counterintuitive, dead bodies do not pose an immediate health threat, reports WebMD for CBSNews.com. It's hard to get an infection from the body of a person killed in a disaster. There's no hurry to bury the dead until every effort is made to identify the bodies and contact surviving family members.

Besides the broken sewage systems polluting the floodwaters, breached drinking water systems are no longer functioning.

With water systems inoperative, sanitation becomes very difficult. Hand washing is the best way to prevent disease — but even hand washing is difficult in the absence of clean water. If available, alcohol-based hand sanitizers are very effective, WebMD reports.

Sam Coleman, a regional director for EPA's Superfund toxic waste division in Dallas, said he could not predict how long it would take to clean, disinfect and then test the hundreds of small community drinking water systems that no longer work because of the loss of power.

"Personally, I've never seen anything like this," he said. "No one has quite seen it this bad."