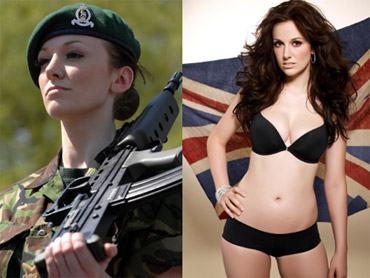 Who says you can't shoot a gun and wear heels?

Miss England, Katrina Hodge, who is also a British soldier, may not be doing both simultaneously, but she sure knows how to conquer the battlefield and rock a runway and now the 22-year-old is battling for big changes in the world of beauty pageants.

Lance Corporal Hodge, who has been dubbed "Combat Barbie," has asked the Miss England pageant to put aside the bathing suit competition and add a category for athletic ability.

"I think it's nerve-racking enough for girls to get up on a stage and speak, let alone appear in a swimsuit," Hodge told Britain's Telegraph. "It's good the girls are being given a sports challenge in this year's competition."

And the Miss England pageant is backing her up.

"We have found that our yearly winner of Miss England hardly ever has to appear in swimwear for public events and it's an unnecessary section of the competition," Angie Beasley, director of Miss England Limited told CBS News. "We also feel it's a good way of bringing the pageant up to date, as the swimwear round often put contestants off from entering."

Hodge was drawn to serving her country at a young age. She left school at 16 and joined the Army. She went on to be one of only ten women in the Royal Anglicans to be posted to Iraq for seven months at the age of 18.

While in Iraq, she won a commendation for disarming and detaining a suspected rebel fighter with her bare hands.

"Katrina is a realistic role model and wanted to show she can break the mold by being a soldier and a beauty queen," Beasley said.