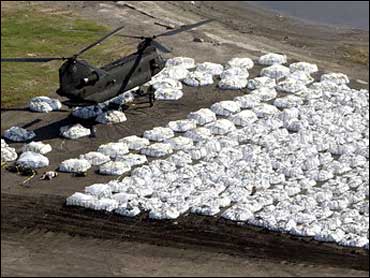 Projects designed to keep New Orleans from flooding in a hurricane prepared the city for a probable scenario, not the worst-case scenario.

The network that was supposed to protect the below-sea-level city from flooding was built to withstand a Category 3 hurricane, the Army Corps of Engineers said. It was overwhelmed when Katrina's winds and storm surge came ashore a week ago as a Category 4 storm.

That has left some lawmakers wondering why officials only considered the consequences of a moderate storm.

"How many times do we have to see disaster overwhelm our preparedness before we recognize that we are playing Russian roulette with people's lives, with their livelihoods and with the life of whole communities?"

Louisiana lawmakers have long lamented that Corps of Engineers programs designed to protect New Orleans and surrounding areas were starved for cash.

Corps officials, said, however, that funneling more money into the agency's levee repair programs wouldn't have totally averted disaster. The infrastructure around the city was designed to withstand only a Category 3.

"You see there was not sufficient money or time to do anything about this," Al Naomi, a corps official who manages New Orleans' levees, told 60 Minutes Correspondent Scott Pelley.

"If someone had said, 'O.K. here is a billion dollars, stop this failure from happening for a Category 4,' it couldn't have been done in time. I'd of had to start 20 years ago to where I feel today I would've been safe from a Category 4 storm like Katrina.

"You have to recognize before we had Category 3 protection we didn't have anything," Naomi said.

The infrastructure assumed that a storm bigger than a Category 3 has a very low probability of occurring.

When the project was designed about 30 years ago, the corps believed it was protecting the city from an event that might occur only every 200 or 300 years.

Former Sen. John Breaux, a Louisiana Democrat, said everyone has known for years that the levees wouldn't stop a "once every hundred years" storm that could put New Orleans under 20 feet of water.

The complaints and problems with corps funding go back to the Carter administration, and presidents since then have tried to draw money from the agency's projects to pay for other priorities.

Mike Parker, a former Mississippi congressman who left as civilian head of the corps in 2002 after criticizing the White House budget office, said the funding problems occurred through Democratic and Republican administrations.

"The corps requested money to complete the projects through the years, but the funding level wasn't given to them in order to do it," he said.

It's the Bush administration taking the brunt of the heat now.

"There was less money spent after that huge project, as, of course, there would be," Blunt said. "Any time you do a big building project, when that project's over, the next year you spend less money."

Blunt suggested there might be a limit to the amount that federal programs can do.

"This is not something that government can always prevent," he said. "You know, God is actually bigger and nature is bigger than we are, and this is one of those instances."

Two Corps of Engineers projects were in place to control flooding and prepare for hurricane damage in southern Louisiana. One was a flood control project with channel and pumping station improvements for Southeast Louisiana; the other was a project to protect residents between Lake Pontchartrain and the Mississippi River levee from surges driven by a fast-moving Category 3 storm.

Each year since 2001, the corps asked for much more money for those two projects than president George W. Bush's administration was willing to request or Congress was willing to spend, according to figures compiled by Sen. Mary Landrieu, a Louisiana Democrat.

In addition, funding for the two programs declined between fiscal years 2001 and 2004, although both saw slight increases this year. Much of the federal budget outside homeland security and defense has been held down while the administration tries to control deficits under control.

Advocates also have pressed for money to restore the eroding Louisiana coastline as additional hurricane protection.

In the future, Breaux said, the federal government must think about a system of levees designed for the once-a-century storm.