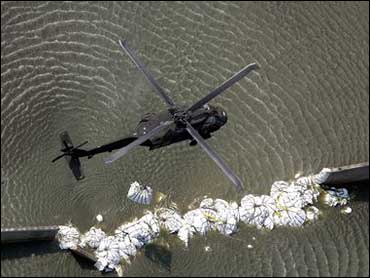 One storm could end up costing almost as much as two wars.

Although estimates of Hurricane Katrina's staggering toll on the treasury are highly imprecise, costs are certain to climb to $200 billion in the coming weeks. The final accounting could approach the more than $300 billion spent in four years to fight in Afghanistan and Iraq.

Analysts inside and outside government agree that the $62 billion that Washington has spent so far was merely the first installment of perhaps an unparalleled sum.

"I cannot put a cost figure on it," Vice President Dick Cheney said Thursday in a visit to the hard-hit states.

The government never has dealt with a disaster of this scale: 90,000 square miles of the Gulf Coast affected, with hundreds of thousands of people displaced and an entire metropolitan area under water.

In 1992, the devastation of Hurricane Andrew in Florida and Louisiana cost $35 billion. The price for the 6.7-magnitude temblor in the Northridge-area of Los Angeles in 1994 was $15 billion to $20 billion.

Members of the Louisiana congressional delegation say it could cost $100 billion just in New Orleans.

As for the overall toll, G. William Hoagland, the top budget adviser to Senate Majority Leader Bill Frist said: "We're obviously over $100 billion. I just don't know how much over."

As the House approved President George W. Bush's second spending request Thursday, the chairman of the House Appropriations Committee predicted that lawmakers would repeat the effort in a few weeks. "It will be the greatest appropriations outlay for a disaster in the history of doing this," said Rep. Jerry Lewis, a Republican.

The imprecision in calculating the costs reflects a Washington process of handling a crisis and the uncertainty of when the furious spending in the immediate aftermath will slow significantly.

Sounding like engineers, number crunchers talked of the "burn rate," how much and how fast money was being spent.

The weekend after the hurricane hit Florida, Alabama, Mississippi and Louisiana, the government still was writing checks for close to $2 billion per day on items such as the 17 million meals ready to eat, tens of thousands of trailers to house refugees, and contracts to rebuild highways and bridges.

That amount slowed to about $1 billion per day last week and was expected to drop off in the weeks ahead.

At first, Congress decided to give the Bush administration the money it requested, comparing the situation to that in days after the attacks of Sept. 11, 2001.

Now, the Office of Management and Budget and the appropriations committees in the House and Senate are contacting government agencies to find out what they need for relief, recovery and rebuilding.

They may get mind-boggling answers because Katrina has shattered all the models on picking up the pieces.

Insurers and actuaries have dealt with the wind damage from hurricanes, but not the impact on buildings and roads of an entire city engulfed in bacteria-laced, sewage-tainted water, possibly for weeks.

"An entire metropolitan area flooded is something we don't have a lot of experience with," said Rade Musulin, an actuary with the Florida Farm Bureau.

Among the lingering questions are what will be rebuilt and who does the work; in writing the insurance checks, is it the government or private companies; how long do food stamps and other assistance last; and how much do federal officials provide.

Homes, levees and even the two new light-rail systems in New Orleans have to be repaired or razed.

"It depends on how this proceeds," said Dan Crippen, a former director of the Congressional Budget Office. "The compensation costs for refugees, you can't keep them in sports stadiums forever. It depends on how quickly they're employed, have homes, how much public assistance. There are so many unknowns here."

The various states that have provided a safe haven for evacuees will be sending their bills to Washington. Texas' two senators, in a letter to Bush, asked about reimbursement for enrolling refugees in Medicaid. The city of New Haven, Connecticut, has estimated that caring for 100 families that is has offered to house would cost $80,000 each, a bill of $8 million.

Mississippi signed a contract for $5.1 million to repair the Interstate Highway 10 bridge in Columbia. If the contractor can finish the work ahead of schedule, a $100,000-a-day bonus is promised.

Robert Lichter, a statistician who studies the use and misuse of numbers in public policy, cautioned against reading too much into the early figures.