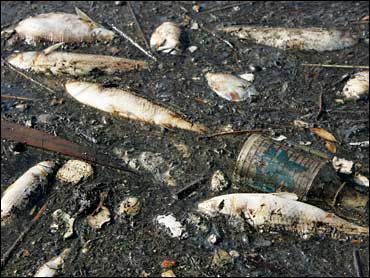 Scientists harvested fish off the Mississippi coast as part of the latest effort to assess environmental damage inflicted by Hurricane Katrina's monstrous storm surge and toxic floodwaters. Researchers hope to determine whether the hurricane caused any contamination from chemical spills, sewer overflows or other poisons that washed into the Gulf of Mexico.

The Nancy Foster, a research vessel operated by the National Oceanic and Atmospheric Administration, began gathering fish Monday off the Florida Panhandle. By Thursday, the vessel was near Horn Island, off the coast from Biloxi, Miss., dipping its net for samples.

Steve Murawski, chief science adviser at NOAA, described the project as "the first scientific effort post-hurricane to look in a very systematic way at what's going on in offshore waters." During the voyage, the crew spotted hurricane debris that included refrigerators, televisions and power poles. As the vessel surveyed the gulf, state and local agencies were checking rivers, inlets and bays for contamination. Aboard the ship, Tracy Collier of NOAA's Seattle lab said the Katrina situation is "so new, we don't know what we're looking for."

He said tests of fish tissue should give some indication of how marine life fared during the hurricane. Sediment samples were also being tested, particularly for any effect on seafood safety. Lewis Byrd, director of seafood quality assurance for the Alabama Department of Public Health, said workers took samples from shellfish-growing areas. He had been worried that silt would cover oysters and kill them, but workers have not found that. "They are telling me the oysters are pretty," he said.

Also Thursday, the Coast Guard released figures that indicate Hurricane Katrina may have spilled more than 7 million gallons of oil from industrial plants, storage depots and other facilities around southeast Louisiana.

That amount is about two-thirds as much oil as spilled from the Exxon Valdez tanker in 1989. But unlike the oil from the Valdez, which poured from a single source, the oil spills caused by the storm were scattered at sites throughout southeast Louisiana. The oil could threaten the region's fragile coastal marshes, but three-quarters of it was not posing a danger to wetlands. The Coast Guard figures showed more than 1.3 million gallons had evaporated or dispersed. Crews had recovered nearly 2 million gallons and had contained another 2.3 million gallons behind booms and other barriers.