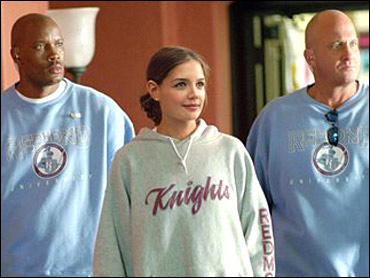 There is only one problem: her father, played by Michael Keaton, is the president of the United States, and everywhere she turns, there is a Secret Service agent.

She falls in love with her dorm resident adviser, played by Marc Blucas.

On Friday's The Early Show, Holmes, who is 25, says she'd like to go to college. "It's something that I'm looking forward to doing someday, and I know that my experience will be completely different, but, at the same time, I had a great time doing 'Dawson's Creek.'"

Holmes says she thinks a recent tabloid rumor that she and her fiance Chris Klein are breaking up is funny. The rumor was started by a conversation about a house overheard in a restaurant.

"It's like any small town and it's people with that nosy little ear and trying to find out your business. It's like, 'What? What are you doing? Go home!'

"I think whenever people are talking about you, it means that you're doing well in this business," she says, "So, the end of the day, it's always a pleasure. You just roll with it."

She says her mother is helping with her wedding plans. "It's been a wonderful year for me."

Some Facts About Katie Holmes: