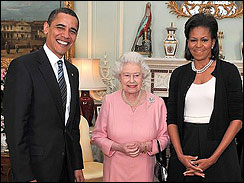 First, there's his stimulus package. He's hoping he can sell it to leaders gathered at the G20 --and encourage them to make similar investments in their own economies.

Despite the President's appeal on the European Main Street, it'll be a tough sell -- especially to France and Germany.

Next, he's carrying the burden of some leftover animosity. Europeans rejected many of President's Bush's foreign policies -- and the treatment of prisoners at Guantanamo Bay. They want to hear that the new President brought them a new start.

Finally, he's packing a hefty plan for Afghanistan and hoping he can convince allies to commit more resources to that war despite a teetering global economy.

This week will be a test for President Obama. But it's also an opportunity to repair strained relations and encourage allies to help lighten his load.

That's a page from my notebook.