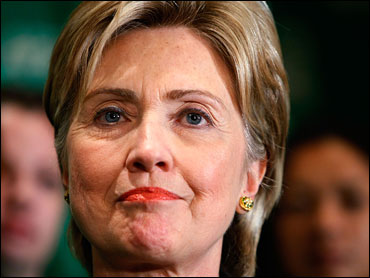 In an interview conducted this afternoon at her home in Chappaqua, N.Y., following last night's victory in the New Hampshire primary, Sen. Hillary Clinton told CBS News anchor Katie Couric that in last Saturday's debate, Sens. Barack Obama and John Edwards were "in the buddy system," but, ultimately, a candidate has to stand on his or her own against the Republican nominee.

That topic and many others are part of the interview that will be broadcast on tonight's The CBS Evening News with Katie Couric. Watch it from 6:30-7:00 p.m. ET/PT.

The following is an excerpt from the interview.

KATIE COURIC: You said, following your win in New Hampshire, that there were a lot of questions coming in to you and not a lot of going in the other direction. What did you mean by that?

SEN. HILLARY CLINTON: That's right. Well, at the debate on Saturday night, I thought it was finally…equal time in a way where everybody was being asked some tough questions and we got some interesting and, I think, relevant information because, in a campaign, you're not running against yourself, you're running against other people, other flesh and blood human beings who have…their strengths, their weaknesses, their qualifications, their ideas. We all need to be out there. This is the toughest job in the world. You know this … I was laughing because, you know, in that debate, obviously Senator Edwards and Senator Obama were … kind of in the "buddy system"… on the stage, and I was thinking, "Well, whoever's up there against the Republican nominee in the election, uh, debates, come the fall, is not going to have a buddy to fall back on." You know, you're out there all by yourself.