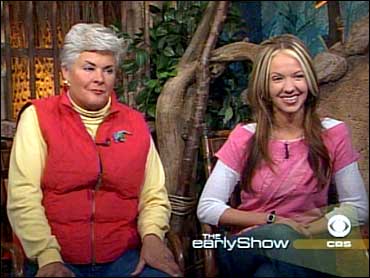 Emotions fly at the "Survivor: All-Stars" camp when contestants get messages from home. So what would that do to their game?

Neleh Dennis, who made it all the way to the final two on "Survivor: Marquesas," tells The Early Show co-anchor Julie Chen it is an incredible way to get players re-charged and focused on the game.

She says, "Day 30 comes along and you're constantly thinking about home. You don't get letters or anything. All of a sudden that comes, and for me, I was in the first season, when my mom got to come out. Those two minutes of hugging her was all I needed to focus on the game and finish that out, because you worry about home. It's nice to get that little bit of comfort, so you know everything back at home is OK."

"I think Amber is going to make it to the end," she says, pointing out that Amber has in her favor boyfriend Boston Rob and her sweetness. "Amber does not have an abrasive dog bone in her body."

Neleh agrees, "She is totally flying under the radar. She's letting Rob take everything, all the heat and everything. If something is going to happen, it has to happen tonight."

Neleh's expectation is for her "Survivor: Marquesas" pal, Kathy Vavrick-O'Brien, to pull a good move tonight.

She notes, "I've never seen anybody on 'Survivor' have as much power as Rob does right now. He has people wrapped around his little pinky. I think if Kathy can get in there, totally expose them, because I think she's clearly the underdog. But it's a game about numbers. If she can convince everybody tonight that it's a numbers game, then hopefully, she can win."

Like Neleh, Maralyn would love to see Kathy win. She says, "Kathy is a very, very strong player. Genuine woman. Has a heart. And hey, she's one of the older broads. Doesn't look like an older broad, but she is."

Asked if in the remaining days, the game will turn into a battle of the sexes, Maralyn says, "It should. It really should, because, obviously, the women have the numbers and they could ensure that the final four are four women."

But she doubts they will do it.

Neleh says, "I think Amber would be a little bit softer if Rob wasn't out there. He's really calling the shots for her and kind of like her security blanket. She's hiding underneath him, which is a good strategy for her, if in fact, like Mad Dog was saying, she predicts her getting to the end. You can see how that would happen. But I don't see the battle-of-the-sexes thing happening because I think Rob has so much power. If Kathy can get in there and get Alicia and Tom and maybe even Amber on her side, they could totally overthrow that."