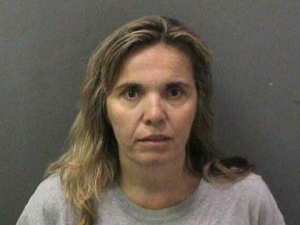 Kathia Davis, 46, was convicted previously of molesting another one of her son's teammates in the summers of 2010 and 2011. That victim was 16. time. The younger  victim came forward with his allegations after hearing news reports about the more recent case, reports the station.

According to the report, Davis had given the 13-year-old and her son alcohol after she caught them sneaking some.

She allegedly then began massaging and kissing her son's friend and attempted to perform oral sex on him as her son and daughter were sleeping on another couch in the room. After the boy's mother learned about the incident, she reportedly confronted Davis at the hockey rink, and Davis reportedly apologized.

Davis was sentenced to 16 months in prison, followed by three years of parole. A district attorney said she was given credit for time served and has only about a week remaining in her prison term, reports the station.

She will be required to register as a sex offender.