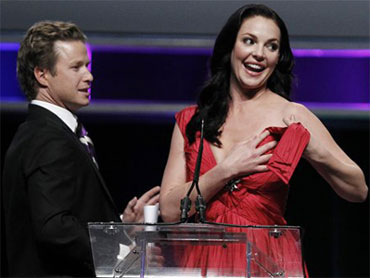 Katherine Heigl almost showed too much "anatomy" as she was accepting an award for Best Female Star of the Year at the 2010 ShoWest Awards in Las Vegas.

As Heigl was accepting her trophy, one of the straps of her red dress broke off and she had a hard time juggling her trophy, holding up her dress and giving an acceptance speech.

Thankfully ,the host of the award show, Billy Bush, was there to lend a hand so she could finish her speech.

Bush tweeted after the show, "Oh my. Hosting showest awards in LV. Heigl comes up to get award, dress strap breaks...I hold her top on while she accepts!"

Heigl, 32, recently dyed her hair from her signature blond to a dark brown, which was the big buzz before her outfit mishap occurred later in the night.

Heigl, always able to laugh at herself, recovered well from her wardrobe malfunction and managed to make it a joke into the evening. After she finished her speech, she found a safety pin backstage and pinned her plunging-neck dress up for the rest of the night.