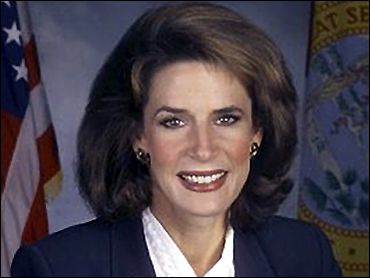 Republican Rep. Katherine Harris said Wednesday she regrets making the claim that a plot existed to blow up the power grid in Carmel, Ind., a notion city officials disputed.

But the Florida lawmaker stands by her statement that based on classified information, the United States has thwarted more than 100 potential terrorist attacks.

Harris, who was at the center of the political storm over the disputed 2000 presidential election, made the comments about terrorism and the plot on Monday at a rally for President Bush in Venice, Fla., and a subsequent interview with the Sarasota Herald-Tribune.

She told the audience that while in the Midwest recently, the mayor of Carmel told her how a man of Middle Eastern heritage had been arrested and hundreds of pounds of explosives were found in his home.

"He had plans to blow up the area's entire power grid," she said, according to the newspaper.

City officials in Carmel said they know of no such plot.

"We're aware of the comments we read in the paper," said Tim Green, assistant chief of police in Carmel, a town about 10 miles north of Indianapolis. "We're not aware of any plans to blow up Carmel's power grid."

Nancy Heck, a spokeswoman for Carmel Mayor Jim Brainard, said, "The mayor never talked to Katherine Harris. They never had that conversation."

Questioned Wednesday, Harris' office issued a statement in which the congresswoman said, "I regret that I had no knowledge of the sensitive nature of this situation."

But Harris stood by her comments to the newspaper that the United States has thwarted potential attacks in the last three years, which she said was based on classified information.

"Actually, it's been more than 100," she told the newspaper. "It's classified ... obviously not classified to me ... but things I can't go into details about." She said only the specifics of the thwarted attacks were classified.

She said Wednesday in a statement that her comments underscore the need "for each of us to remain alert and vigilant in fighting terrorism."

Harris serves on the House Financial Services Committee and the International Relations Committee, which often gets briefed on terrorism. She does not serve on the House Intelligence Committee.

Disclosure of classified information is forbidden by law and by the rules of Congress, which require members to take an oath. However, prosecutions or sanctions of members for revealing secret information are rare.