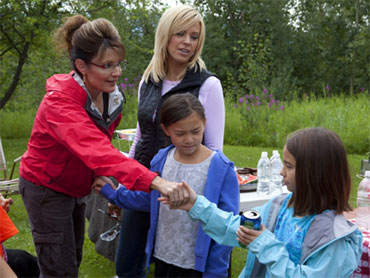 Kate Gosselin is not a happy camper.

On this week's edition of "Sarah Palin's Alaska," she and her brood make a much-anticipated guest appearance. But don't expect it to reveal her inner Daniel Boone.

"How would you like to go camping with Kate and her eight kids - that TV show you watch?" Sarah Palin asks her daughter, Piper, at the start of the episode.

Piper squeals with delight at the idea of hanging with these stars of another TLC series.

As things develop, the camping trip in the Alaskan wilds will be no day at the beach for Kate. But it makes for a hilarious hour of Palin's show, which airs on TLC Sunday, Dec. 12 at 9 p.m. EST.

Read no further if you don't want spoiler details of Kate's stab at roughing it.

For a few fleeting moments, it seems she will savor her visit with the Palin family. She instantly bonds with Sarah, as they compare notes on the predatory nature of the media.

"There's not a whole lot of people that I run into that can understand the scrutiny (by) the media and beyond," says Kate, whose crumbling marriage to Jon was documented on "Jon & Kate Plus 8" while it spurred a feeding frenzy from the tabloid press.

Now, single mom Kate and her kids just happened to be in Alaska taping one of her "Kate Plus 8" specials, which occasioned their guest spot with the Palins.

The first stop: Sarah takes Kate to a bear safety class to prepare her for their camping expedition.

On the road from Wasilla to the class in Anchorage, Sarah sort-of jokes that, in case of a bear attack, "You need a partner with you who's slower than you."

"Oh, my gosh!" replies Kate, who already was spooked by the bear rug in the Palins' home. "Sacrifice your friends?"

At the rifle range, she looks more miserable than she used to look with Jon.

And that's only the beginning.

The day of the camping trip, it's - wouldn't you know? - pouring rain.

Out in the middle of nowhere by a stream and surrounded by mountains, Sarah is smiling, chipper and (literally) loaded for bear.

"Rain or shine, Alaskans still camp. We still find a way to have fun," she chirps.

Then Kate and her kids land at the campsite. Quickly, Kate proves to be a bigger pill than a horse tranquilizer.

"I'm not worrying about bears right now," she is soon grousing. "I'm just worried about keeping my toes wiggling 'cause they're freezing."

Sarah, daughters Piper and Willow, husband Todd and other family members seem to be having a blast. So, for that matter, are Kate's youngsters.

"The kids are having fun, so I'm tolerating it, but this is my new home," grumbles Kate, having sullenly planted herself, apart from the rest, beneath a tarp. "I am miserable, but, I mean, somebody's got to be."

Sarah, ever gung-ho, announces to the group, "This is the most luxurious camping spot I've ever seen!"

Cut to Kate, who tells the camera, "It just kills me that people, like, willingly do this."

Soon everybody else is enjoying hamburgers, hot-dogs and s'mores from the camp fire.

Maybe it was finding out the hot dogs are moose. About that time, Kate loses it.

"I don't see a table, I don't see utensils, I don't see hand-cleansing materials," she whimpers. "This is not ideal conditions. I am freezing to the bone, I have 19 layers on, my hands are frigid. I held it together as long as I could and I'm done now!"

She gathers up her children and, mere hours after their arrival, they have eaten and run.

Fortunately, Sarah knows the show must go on. Minus the Gosselins, she settles the crowd down for the night.

"Well, I thought we were gonna go camping with the Gosselins," she says when it's all over, full of glossy good cheer. "Turned out, we didn't. We had lunch with them on a sand bar."

To view a TLC trailer for the episode posted by Us Weekly Magazine click on the video player below.