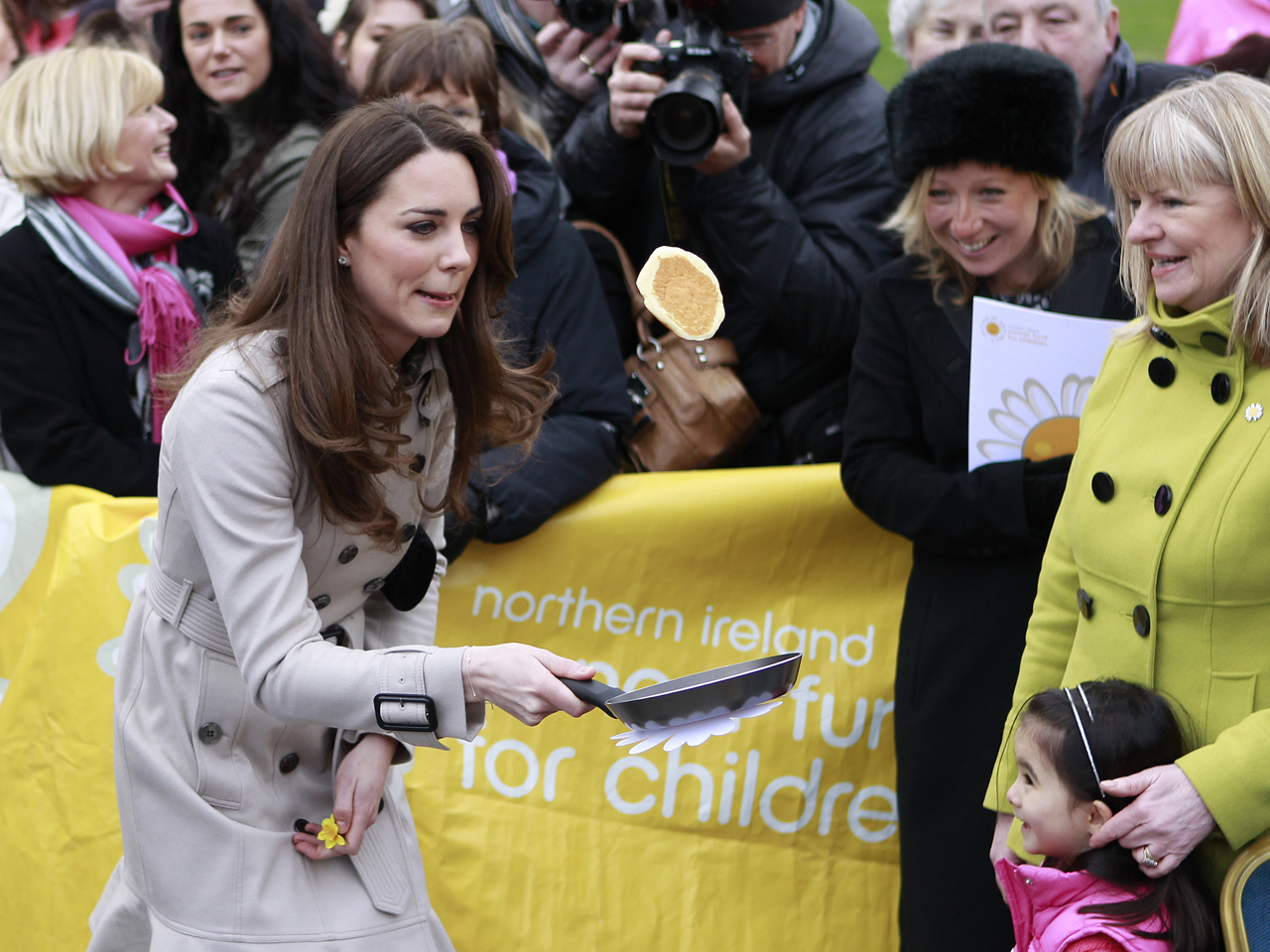 BELFAST, Northern Ireland - Call her Kate, at least for now.

It may be years before Kate Middleton becomes queen, but questions are already being raised about the princess-to-be's preferred moniker: Queen Kate or Queen Catherine?

Ever since her engagement became official in November, palace officials — and her fiance, Prince William — have taken to calling her Catherine, the name used on the official, gold-embossed invitations to their nuptials at Westminster Abbey on April 29.

But Middleton herself may not embrace the change just yet. During a joint visit Tuesday with Prince William to Northern Ireland, Middleton mentioned casually that she thinks of herself primarily as Kate.

"I'm still very much Kate," said Middleton, when a woman outside Belfast City Hall asked what name she preferred.

The "Kate" versus "Catherine" debate has emerged in recent weeks because of William's switch in using it and because "Catherine" or the initial "C" is being imprinted on official wedding memorabilia and commemorative china.

"I think that Catherine does have a more historic feel to it; there have been several queen consorts called Catherine in British history," said Charles Kidd, editor of the blue-blood bible Debrett's Peerage. "So Queen Catherine does sound quite familiar. It has a historic ring to it."

He said Kate also sounds pleasant but reminds him of the feisty character in "Kiss Me Kate," a Cole Porter musical that features William Shakespeare's play "The Taming of the Shrew."

According to the official royal wedding website, which has already received more than 2 million visits since it started up last week, Middleton does not prefer one name over the other. It says Middleton used the name "Catherine" when she was growing up with her family but tends to use the more casual "Kate" in her professional life.

"Miss Middleton uses both names equally, and she has never expressed a preference for either Catherine or Kate since her engagement," the website states.

Most of the British media still calls her "Kate," and headline writers are not expected to change.

A spokeswoman for Prince Charles, who declined to be named according to palace protocol, would not comment Tuesday on Middleton's statement in Belfast. But she noted that Middleton's family and friends call her "Catherine" and that is her real name.

The late Princess Diana, William's mother, also had an informal nickname — "Lady Di" — that was too casual for formal court affairs, where she was called Her Royal Highness, The Princess of Wales. After her death, she became known as "The People's Princess," a phrase coined by then-Prime Minister Tony Blair.

No matter what she is called, Middleton and her beau showed true star power in Belfast, delighting an enthusiastic crowd on their first official visit to Northern Ireland. Police kept watch from the rooftops as the center of Belfast was brought to a standstill.

William and Middleton were cheered outside Belfast City Hall as they took turns flipping a pancake, the traditional treat eaten on Shrove Tuesday, the day before the Catholic season of Lent begins on Ash Wednesday.

"My little heart is beating 90 to the dozen after meeting Kate," said Gloria Lowry, from Carrickfergus. "She is absolutely beautiful and William so handsome. They make a perfect couple."

It was their third public outing in recent weeks, completing a circuit that has taken them to all parts of the United Kingdom of Great Britain and Northern Ireland. Last month, the couple traveled to Wales and to Scotland.

On Monday night, Middleton, William and Charles made a private visit to Westminster Abbey to hear a full orchestra and a choir perform music that is being considered for the wedding ceremony.

Rebecca Fletcher, 11, who took the day off school, called "Katie!" and offered a bouquet of daffodils.

"You're a very lucky lady. I'm so jealous," the girl said.

"I am lucky," Middleton said. "He's a very nice man and I'm looking forward to spending the rest of my life with him."

Heather Lindsay, whose daughter Laura Ann is also getting married this year, brought "bride" and "groom" caps in the hope of getting William to wear one.

"He politely declined. He said his mother would not appreciate him wearing the hat," said Lindsay, from Killyleagh.

"I told Kate I am also planning for a big wedding as well. I told her not to lose any more weight. She laughed and said it was all part of the wedding planning," Lindsay added.

William and Middleton also toured Greenmount Agricultural College in Antrim outside of Belfast, where they were shown a herd of 30 prize Holstein dairy cows and taught how to rate cows.

William drew laughs by comparing the qualities judges look for in cows to a dating website then refereed a tug of war between agricultural students.