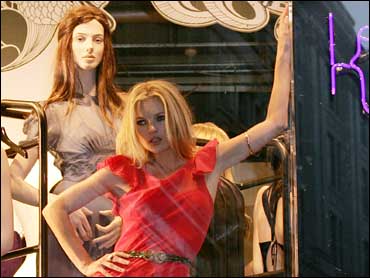 Hundreds of shoppers lined up for a sneak peek at Kate Moss' new collection for British fashion retailer Topshop.

Moss posed briefly in a store window in a flowing orange dress to promote the preview only moments before it began. Topshop was to let groups of shoppers browse for 20 minutes at a time Monday to avoid a mad scramble.

The collection includes jeans, shirts and dresses designed by the 33-year-old supermodel.

First in line outside the chain's Oxford Street store was 16-year-old Yasmin Kidd. "I want to get first pick," said Kidd, who was accompanied by her mother. "I'm a fan of Kate Moss and I usually shop at Topshop."

Customers could try on a maximum of eight garments during the preview and could purchase five of them. The company said it hoped limiting the number of garments per person would discourage shoppers from selling items on the eBay online auction house.

The collection by Moss was to be formally unveiled Tuesday.

Shoppers can choose from 50 designs, including a vest top for $24 and a cropped leather jacket for $300. Other items include skinny jeans, one-shoulder minidresses and T-shirts with the letter K woven into the designs.