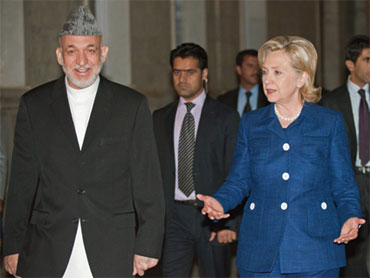 President Hamid Karzai on Tuesday reaffirmed his commitment for Afghan police and soldiers to take charge of security throughout the nation by 2014 and urged his international partners to spend their money on Afghan priorities, not short-term projects.

Karzai spoke at an international conference on the future of Afghanistan where representatives of 70 nations and organizations were endorsing a plan for how Afghan security forces would eventually take charge, but it's still unclear when the transition would actually begin.

"The significance of having seventy countries attend the largest international conference in Kabul in three decades, is that it engages nations -- not involved in the war effort -- in rebuilding Afghan democracy," says CBS News foreign affairs analyst Pamela Falk from the U.N.

Wearing a traditional striped robe and peaked fur hat, Karzai said that Afghanistan and its Western backers share "a vicious common enemy." But, he said, victory will come in giving Afghans as much responsibility as possible in combating the insurgency within its borders. He was flanked by international diplomats including United Nations Secretary-General Ban Ki-moon and U.S. Secretary of State Hillary Rodham Clinton.

"I remain determined that our Afghan national security forces will be responsible for all military and law enforcement operations throughout our country by 2014" - more than three years after President Obama's date for the start of an American troop drawdown, Karzai said. "Our goal is to transfer the three organs for national security forces into trusted national institutes dedicated to fulfilling their constitutional duty of ensuring the integrity and security of our country."

NATO Secretary-General Anders Fogh Rasmussen said the alliance will never allow the Taliban to topple the government of Afghanistan. But he said that transition to Afghan-led security would be based on "conditions, not calendars."

Karzai also expressed his government's desire to take charge of more of its affairs. He asked his international partners not only to channel 50 percent of their foreign assistance through the government within two years, he also urged them to align 80 percent of their projects with priorities that have been identified by Afghans.

"Let us together focus less on short-term projects," he said.

"It is time to concentrate our efforts on a limited number of national programs and projects to transform the lives of our people, reinforce the social compact between the state and the citizens," Karzai said.

"Toward this end, the Afghan government, working with NATO, has developed a broad framework for the process that will help create conditions for transition, province by province, district by district, so the Afghan security forces can assume full responsibility for security in the transitioned areas," she said.

While Obama's timetable is hinged on security conditions on the ground, it has raised concerns in Afghanistan and the region that the U.S. is ready to exit the war. Clinton said the July 2011 date reflects "both our sense of urgency and the strength of our resolve."

"The transition process is too important to push off indefinitely," she said. "But this date is the start of a new phase, not the end of our involvement. We have no intention of abandoning our long-term mission of achieving a stable, secure, peaceful Afghanistan. Too many nations - especially Afghanistan - have suffered too many losses to see this country slide backward."

The conference comes at a critical juncture in the war. NATO and Afghan forces are moving into areas controlled by the Taliban, and the insurgents are pushing back. June was the deadliest month for U.S. and international forces with the deaths of 103 service members, including 60 Americans.

Afghan and international forces raided a compound on the outskirts of Kabul on Monday night, killing several insurgents who were believed to be planning an attack on the conference, NATO forces said in a statement.