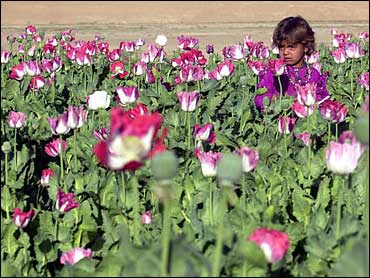 A U.N. survey released this week showed Afghanistan this year supplied 87 percent of the world's opium - the raw material for heroin - following record-high cultivation that has skyrocketed since the fall of the Taliban in 2001.

The heroin industry undermines Afghanistan's democracy and puts money into the coffers of terrorists, the U.N. report said, adding that the "fear that Afghanistan might degenerate into a narco-state is slowly becoming a reality."

Afghan and Western counter-narcotics officials have said that U.S. experts are looking at using crop dusters to spray opium poppies with herbicides - a key weapon in the disputed U.S.-backed war against coca farmers in South America.

But Karzai said he opposes aerial spraying because of concerns over side effects among residents in farming communities close to the fields.

"While emphasizing its strong commitment to the eradication of poppy fields, the government of Afghanistan opposes the aerial spraying of poppy fields as an instrument of eradication," Karzai's office said in a statement following Thursday's U.N. report.

The U.S.-backed leader expressed alarm at reports from the key poppy-growing province of Nangarhar, close to the Pakistani border, that planes had already sprayed fields planted with poppy.

"The president is deeply concerned about complaints from the region pointing to possible side effects of the aerial spraying on the health of children and adults," the statement said.

Officials will travel to the area to investigate, it said.

The United States and Britain are training small paramilitary units to smash laboratories and arrest drug suspects. Nangarhar has been earmarked for vigorous crop eradication.

But it is unclear whether officials already have begun experimenting with herbicides, which critics say can wipe out legal crops planted nearby as well as harming villagers and livestock.

Officials in Kabul could not be reached immediately for comment, but Mohammed Daoud, the Afghan deputy interior minister for counter-narcotics, told AP recently that the planes "could be useful, and would frighten people" - but said they should only be used as a last resort.

One Western official involved in Afghan drug policy said in an interview last month that spraying was "not going to be imposed on anybody" without Afghan government support.

In recent years, Afghanistan has used squads of laborers to thrash down poppy crops, but that has had little impact on drug output.

The annual survey released Thursday by the U.N. Office on Drugs and Crime found poppy cultivation rose 64 percent to a record 323,700 acres in 2004, producing an estimated 4,200 tons of opium. It valued the trade at $2.8 billion, or more than 60 percent of Afghanistan's 2003 gross domestic product.

On Wednesday, U.S. drug enforcement agencies asked Congress for an additional $780 million to fund both the crackdown and provide alternative crops or livelihoods for farmers.

Pressure is also mounting to snatch big smugglers - believed to include a string of government officials - and officials say judges have already been recruited for a special court to try suspected drug kingpins.

Mirwais Yasini, the head of Afghanistan's Counter-narcotics Directorate, said Thursday that this year's surge in production only added to the urgency.