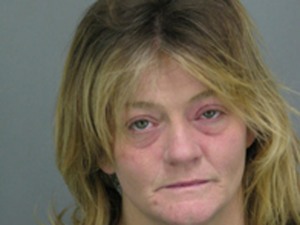 (CBS/AP) SPARTANBURG, S.C. - A South Carolina woman who called herself the "Karate Kid" tried to bite a deputy and had to be shocked twice with a Taser before authorities managed to handcuff and arrest her, CBS Charlotte reported.

Spartanburg County authorities say 40-year-old Tracey McSwain Smith, of Chesnee, slapped a deputy, breaking her sunglasses, and tried to bite an officer on the arm.

Deputies say Smith's sister called authorities Sunday to get medical attention for her. When authorities asked Smith for her name, deputies say she held up her arms and one leg and said she was the "Karate Kid." They say that's when things got physical, initiated by the suspect.

According to CBS Charlotte, Smith told deputies she had used methamphetamine and huffed gasoline earlier Sunday