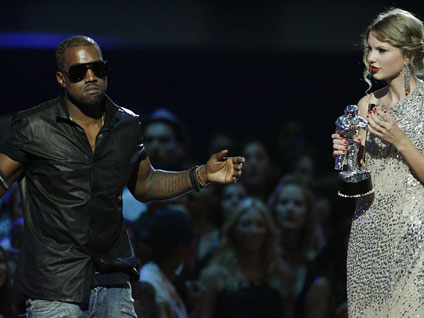 NEW YORK (CBS) Kanye West is saying sorry to Taylor Swift on Twitter ... and apparently in an upcoming song.

The rapper took to his Twitter account over the Labor Day weekend to express his feelings of remorse for embarrassing country star Taylor Swift during her "Best Female Video" acceptance speech at the 2009 MTV Video Music Awards. West wrote on his Twitter, "It starts with this... I'm sorry Taylor."

"I wrote a song for Taylor Swift that's so beautiful and I want her to have it. If she won't take it then I'll perform it for her," said West through his Twitter account. West is gearing up for the release of a fifth studio album album.

"She had nothing to do with my issues with award shows. She had no idea what hit her. She's just a lil girl with dreams like the rest of us," West said.

In a series of Twitter messages, the rapper wrote: "She deserves the apology more than anyone... Who am I to run on stage? I would never ever again in a million years do that. Sorry to let you down. It is distasteful to cut people off as a general rule. What's the point of dressing tastefully if I'm going to act the complete opposite? Yes I was that guy. A 32 year old child. When I woke up from the crazy nightmare I looked in the mirror and said GROW UP KANYE ... I take the responsibility for my actions. Beyonce didn't need that. MTV didn't need that and Taylor and her family friends and fans definitely didn't want or need that."

No title has been released for the possible song nor has West stated whether he ever recorded it.

West has not personally approached Taylor Swift to say sorry since the incident  happened almost a year ago.