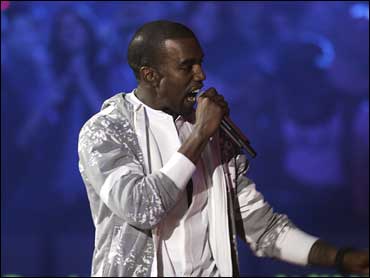 The biggest star of the Emmy after-parties wasn't the cast of "The Sopranos," or a cigar-chomping Jeremy Piven.
It was non-actor Kanye West, and boy, did he not let you forget it.

Hundreds of attendees rushed the stage when West — who had mocked himself in a comedy sketch on the Emmys broadcast — joined guest performer John Legend just after 11 p.m.

Wearing his customary shades and jumping atop giant speakers, West urged the crowd to roar "Hell yeah!" and "Kan-ye!," and ended the mini set with his 2005 hit "Gold Digger." He began another song but said he forgot the lyrics and stopped his performance.

If West was the model of swagger, then Emmy winner Terry O'Quinn was the image of modest calm.

Seated at a table near the stage with his wife Lori and his manager, O'Quinn said he had left his best supporting actor trophy, for "Lost,"
in the car.

"I figure you get nominated, you get a ticket to the dance and then it's a crap shoot," O'Quinn, who plays the mysterious John Locke on the island drama, told The Associated Press. "In a year, most people you ask won't know who won this award tonight."

Guests at the party, where women in corseted Marie Antoinette-themed costumes served chilled champagne, included Emmy nominee Kyra Sedgwick and her husband Kevin Bacon, along with "Dancing With the Stars"
alumni Joey Fatone and Lisa Rinna.

Glass cases of flowers submerged in water decorated the hall's winding interior and adjacent garden, lending the event an air of Oscar-worthy refinement. Sets by '80s heroes Duran Duran and high-energy saxophonist Dave Koz added some spirit to the mix.

One celebrity attendee, however, resigned himself to a not-so-late evening.

"This is probably my only party of the night because I have diaper duty in the morning," said former Anna Nicole Smith flame Larry Birkhead, flanked by two beautiful women.

Across town, HBO's Thai-themed shindig at the Pacific Design Center in West Hollywood was still thriving at 1 a.m.

Revelers — including Los Angeles Mayor Antonio Villaraigosa, accompanied by his daughter — walked on a gold and purple carpet, surrounded by gold Buddhas and tiered table umbrellas.

"Entourage" star Jeremy Piven, holding his best supporting actor trophy in one hand and sucking on a sausage-thick cigar with the other, accepted congratulations and hugs.

Told at one point by fire officials to stop smoking, the actor — as might his feisty character, agent Ari Gold — simply moved to another spot, and continued smoking.

On the other side of the party, Terrence Winter — executive producer of "The Sopranos" — smiled as he talked about the show having claimed the night's best drama series award after leaving the air this year.

Standing near his trophy, Winter said the HBO bash was for people "who truly loved each other."

"It's bittersweet. It feels like the going away party for the cast and crew. But what a going away," he said.