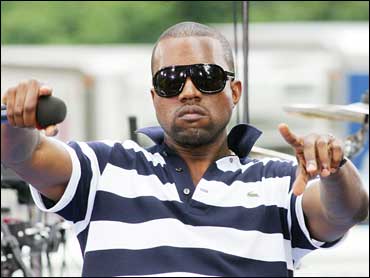 The world might have been shocked by the state of Britney Spears at Sunday's MTV Video Music Awards, but Kanye West wasn't.

"I knew that was going to happen," he said in an interview with radio host JJ Kincaid New York City's Z100 radio station.

By "that" he meant that the formerly immaculately toned Spears came on stage in less than perfect shape, wearing an unflattering sparkling bikini and stumbling her way through an unconvincing lip-syncing routine. And MTV knew exactly what they were doing, West said.

"They knew that Britney wasn't ready and they had her perform so they exploited her," the "Stronger" rapper said.

West, who released his new album "Graduation" today, said he felt sorry for Spears towards the end of her performance of her new single "Gimme More."

But West is livid about the way he says MTV treated him. He feels that he was victimized just as much as he says Spears was. West was nominated for five different awards and didn't win one. He said that MTV didn't give him the chance to shine. Instead, they gave Justin Timberlake and Timbaland the most coveted performances.

Timberlake, who West says is his favorite artist, opened last year's show and closed this year's. He also had his own party suite with super-producer Timbaland. West had his own suite but was miffed that he didn't get his chance to show off "Stronger" on the main stage.

"Why aren't you giving me a chance, given that 'Stronger' is one of the No. 1 songs right now, give me a chance to give it that type of look," he said.

West said he was the first artist MTV signed on for the show and the music network went to great lengths to make him feel like he was "in" with the way the show was being run. He also said MTV promised him he would win video of the year if he came to the show. West says he feels MTV betrayed and deceived him.

"It's almost as if they are trying to antagonize me to see if they can create a TV moment," he said.

To make matters worse, West was insulted that MTV used his co-star in the video for "Touch the Sky," Pamela Anderson, who made an off-color introduction on the telecast.

"One of the best times I've ever had was making out with the next performer in the middle of the desert," she said. "I think I had my tongue so far down his throat I could taste his fiancée -- and I might need a repeat performance later tonight."

West, who is recently engaged, said he thought the joke was disrespectful to his relationship.

The "Gold Digger" singer has a troubled history with MTV. He stormed the stage at MTV Europe Awards in protest after his song "Touch the Sky" didn't win best video.

"If I don't win, the award show loses credibility," he said then.

Now, West has apparently lost all faith in MTV and said he is no longer working with the network and already cancelled his upcoming appearance on TRL.