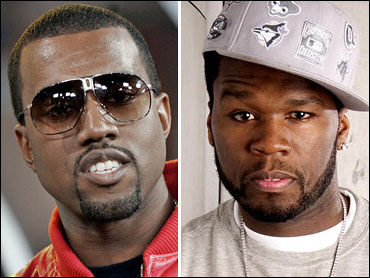 50 Cent may be getting hip-hop's equivalent of a gold watch next week. Early reports have Kanye West beating 50 in their much-hyped battle of album sales: West's "Graduation" is on pace to sell about 575,000 to 700,000 its first week out, while 50 Cent's "Curtis" is on track to do 550,000, according to Billboard magazine.

Both albums came out Tuesday, and a confident 50 Cent famously announced that he would retire if West outsold him in first-week sales.

"I just don't view him as competition based on our previous sales histories," 50 Cent told The Associated Press last month.

But it looks as if 50 underestimated the power of West, and perhaps, overestimated his own appeal.

"I don't think it's helped 50 that so many of these prerelease singles that have come out have fizzled on the charts right away," said Jonathan Cohen, Billboard's senior editor. "There were street date changes. It has just not been a good run-up to this record for him."

Meanwhile, Cohen says West is having a more "charmed" experience, despite his recent tantrum at the MTV Video Music Awards after going home empty-handed.

"These tantrums he goes on, these outlandish comments he makes, they don't really hurt him," said Cohen. "If anything, they've got more people interested in what he's all about."

Still, don't finalize those retirement party plans for 50 just yet; there are several days to go before a final tally is determined, and he could catch up and overtake West.

"It is a projection," Cohen said of the initial sales predictions. "It can very easily deviate."

And there's still the potential of a third-party candidate winning the race: country superstar Kenny Chesney, who's "Just Who I Am: Poets and Pirates" also was released on Tuesday, is so far on pace to sell 400,000 to 550,000 copies.