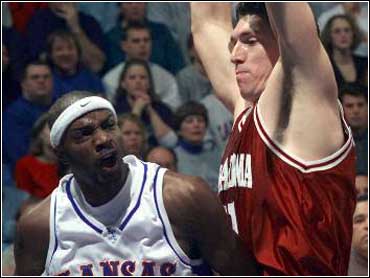 Those 10 points by Kansas's Eduardo Najera against Nebraska last Monday night no longer are his lowest output of the season.

The 8 he managed against Kansas on Sunday are.

Holding the 6-foot-8 Najera to his worst game of the season, the No. 24 Jayhawks survived terrible free-throw shooting and held on for a 53-50 victory over the No. 20 Sooners and their slumping star.

Kirk Hinrich's free throw was the only point Kansas (19-7, 8-4 Big 12) scored in the final 4:19 and the Jayhawks missed four straight foul shots in the final minutes.

But after Oklahoma (20-5, 8-4) rebounded Jeff Boschee's second miss with 29 seconds to go and started down court, Najera lost the ball out of bounds. A few seconds later, Hinrich hit one foul shot, making it 53-50.

Oklahoma's Kelly Newton missed two 3-pointers in the final seconds as Kansas avoided what would have been its first two-game home losing streak in 12 years.

"I was not very aggressive today, especially down the stretch," said Najera, the Big 12's second-leading scorer with 19 points per game.

He was only 3-for-12 from the floor. But his turnover after Boschee's missed field goal was the killer.

"That was a huge possession for us," Najera said. "That was the game right there, that play, that turnover."

Has Oklahoma's star player, who has totaled only 18 points the past two games, slipped into a shooting slump?

"I didn't know he was in a shooting slump," Oklahoma coach Kelvin Sampson said.

Could he be tired?

Oklahoma's Nolan Johnson said the constant attention he draws every game could be draining his strength, however.

"He didn't have one of his better games, but he gets a lot of double and triple teams," Johnson said. "And that probably wears on him."

The teams spent the rest of the game trading turnovers and missing shots until Hinrich hit his foul shot with 14 seconds to go. But Oklahoma shooting only 33 percent for the game failed to take advantage of the many opportunities Kansas handed out and got outrebonded 50-36.

Johnson had 14 points for Oklahoma. Gregory had 11 for Kansas, and Gooden and Ashante Johnson had 10 apiece.

Lester Earl returned from a seven-game suspension and drew guard duty on Najera, who went to the bench with his fourth foul with 9:30 left and Oklahoma leading by two points. When he returned at the 5:19 mark, Kansas led 50-46.

"Najera is a load," Kansas coach Roy Williams said. "It helped a lot when he got his fourth foul."

Boschee, who was only 2-for-17 against Iowa State on Wednesday night, hit a 3-pointer in the final minute of the first half to send the Jayhawks into intermission with a 27-23 lead and wound up with nine points.