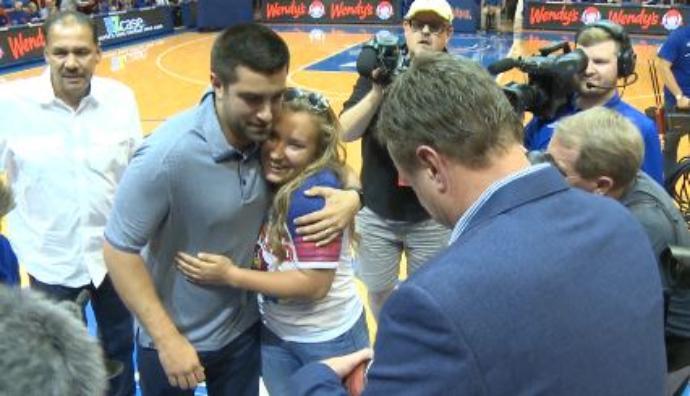 LAWRENCE, Kan. - A 21-year-old University of Kansas student who won $10,000 in a half-court shot game has plans for the money: help her grandmother who rescued her from foster care when she was 10 years old.

“I was just thinking about my Nana and what I was going to do to help her,” said Jordan Stiers, a sophomore from Independence, Missouri, who won the money Saturday when Brennan Bechard, director of Kansas basketball operations, made the half-court shot during Late Night in the Phog in Lawrence, reports CBS Wichita affiliate KWCH-TV.

Stiers went to Late Night a year ago so she knew the rules, which include picking any non-player in the building to shoot the shot for them. She chose Bechard who sank the shot the year before.

KWCH reports that Kansas basketball coach Bill Self offers a hand-written check to a random student each year if someone can make a half-court shot on his or her behalf. On Saturday, Self signed his own personal check on the floor in front of the Stiers and Bechard.

Stiers, who is the first one in her family to graduate high school, pointed to her sister in the crowd after the shot went through. After that, she thought of her grandmother, Roxanne Edwards, who also volunteered to raise four of Stiers’ siblings.

“She’s my mom. She’s my dad. She’s my grandma - she’s everything,” Stiers said. “She has done so much for me, taught me so much.

“There’s nothing I can do to repay her, but this will say thank you a little bit.”

Stiers said the money will help her grandmother pay bills.

“I don’t think she’s going to believe me,” Stiers said. “This kind of thing doesn’t happen to people like us. She’s probably going to cry, just like I did.”