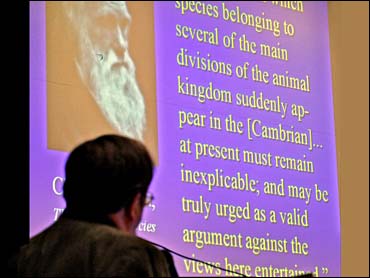 Eighty years after Charles Darwin's theory of evolution was put on trial in one U.S. state, Kansas education officials began four days of trial-like hearings to consider changes to how Kansas students are tested on the origins of life.

Science groups are boycotting the hearings, held by a Board of Education subcommittee, because they view them as being rigged against evolution. The board could revise its science standards in June to include both the theory of evolution and criticism of it.

Many scientists fear that the board will follow recommendations from advocates of "intelligent design" in adopting standards critical of evolution. Conservatives hold a majority on the 10-member board.

Evolution says that changes in species can lead to new species, and that different species, including man and apes, have common ancestors. Intelligent design advocates contend the universe is so complex it must have been created by some higher power.

In 1999, the board deleted most references to evolution in the science standards. Later, current standards were adopted to include evolution as a key education concept.

Last year, the board asked a committee of educators to recommend changes to the standards and received two competing proposals, one of which would include criticism of evolution.

The board has sought to avoid comparisons of its hearings with the 1925 Scopes Monkey Trial in Dayton, Tennessee, in which teacher John Scopes was convicted of violating a law against teaching evolution. But the hearings resemble a trial, with attorneys managing each side's case.

Witnesses were questioned by Topeka attorney Pedro Irigonegaray, who was arguing against teaching theories other than evolution.

He asked witness Bill Harris, an advocate of intelligent design, "Where in the standards does it say teachers and students cannot discuss criticism of evolution?"

"It doesn't say that. I think it's implicit," said Harris, a professor of medicine at the University of Missouri-Kansas City.

Instead of testifying at the first hearing, representatives of national and state science groups held the first of a planned series of news conferences at the Statehouse. On display Thursday night was a wheel barrow and two crates full of copies of scientific journals — to suggest evolution is well-documented.

"The only way we can make our point is to stop playing their game," said Harry McDonald, president of Kansas Citizens for Science.

Intelligent design advocates pointed to the boycott as evidence that evolution's supporters are afraid to debate.

The state board's standards determine what is on statewide tests, but local school boards decide what is actually taught and which textbooks are used.

Similar battles have been waged in the past few years in Michigan, Ohio and Pennsylvania.