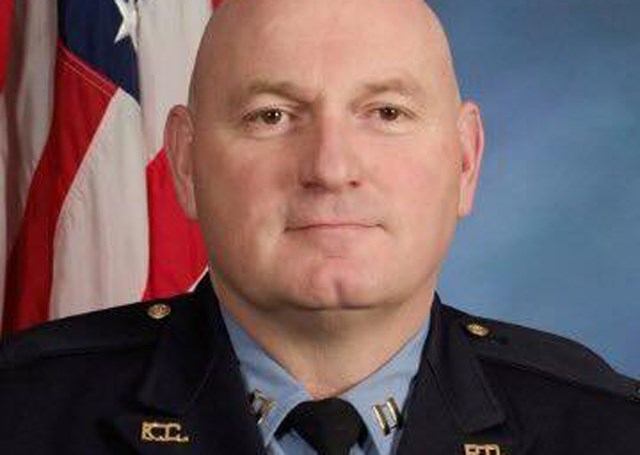 KANSAS CITY, Kan. -- The fatal shooting of a Kansas City, Kansas, police officer was not part of a planned ambush, but the work of someone trying to evade arrest, authorities said Wednesday.

Police Chief Terry Zeigler said during a news conference that authorities have two young men in custody, but declined to give details about possible charges. The department is working with prosecutors and planned to present the case to them "hopefully later today," Zeigler said.

While the attack isn't part of the recent string of shootings of police in the U.S., Zeigler said the hate against police has got to stop.

"The crime does not fit the national narrative of planned attacks against law enforcement officers, but it does fit the narrative fact that words matter. The anti-hate speech has got to stop because the consequences are real," the chief said.

Capt. Robert Melton was by himself searching for a suspect in a drive-by shooting when he drove up to someone who matched that person's description just before 2 p.m. Tuesday. Before the 46-year-old could get out of his vehicle, he was shot several times through his passenger-side window, the chief said, adding that the department was reviewing its procedures.

Melton was a 17-year veteran of the Kansas City, Kansas, Police Department. According to his LinkedIn profile, he had also served in the Kansas Army National Guard and was deployed to Afghanistan from September 2010 to March 2012.

"Officers come to work every day knowing they may have to die in the line of duty," Zeigler said. "Most of us go through our careers and never have to experience that."

In the lobby of police headquarters, people left cards and flowers on a table draped in blue cloth. Kathryn Courtney brought a bouquet of yellow daisies Wednesday. The 31-year-old said she had known Melton for nearly 20 years, describing him as "born to protect and serve" and "a wonderful man with a heart of gold."

It's the second time a Kansas City, Kansas, police officer has been shot and killed this year. In early May, detective Brad Lancaster was fatally shot near the Kansas Speedway, and Melton had served in the police honor guard at Lancaster's funeral. The shooting also comes as police departments across the country are on edge after ambush attacks left eight officers dead in Texas and Louisiana.

Mayor Mark Holland of the Unified Government of Wyandotte County referenced Lancaster's shooting Wednesday, saying that the community is still "healing and reeling" from that shooting, which was the first in the department in 19 years.

Ida Ford, 87, was watching television in her two-story brick home when gunfire erupted just outside. Ford said she thought someone was knocking on her air conditioner until her son rushed downstairs and told her the noises were gunshots. Ford said she looked through her window and saw the officer sprawled in the road in front of her home, and she watched as paramedics worked on the officer.

"I'm just so sorry for his family," she said.

Melton was brought to the University of Kansas Hospital just before 2:30 p.m., but resuscitation efforts did not work, trauma surgeon James Howard said Tuesday.

The shooting happened after police responded to a report around 1:30 p.m. from a person who said several people in a car were firing shots. The suspect vehicle took off as police arrived, but it crashed into a fence and the occupants bailed out at 1:36 p.m., police spokesman Tom Tomasic said Tuesday.

Outside of the hospital where Melton was brought, local Baptist preacher Jimmie Banks - a friend of the city's mayor - sat dejected on a bench, head lowered, after attending Tuesday's news conference.

"The contributions that peace officers make to protect and serve - they deserve better," he said. "When they leave home, the family expects them to return. It's shameful this has happened."