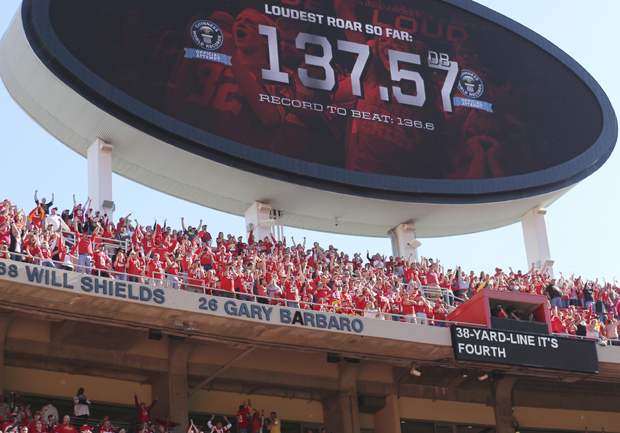 KANSAS CITY, Mo. Arrowhead Stadium is once again the loudest stadium in the NFL.

This time, it's official.

The Kansas City Chiefs fans broke the world record for an outdoor sports stadium in their 24-7 win over Oakland on Sunday when they reached 137.5 decibels in the closing minutes.

An official from Guinness World Records said that Chiefs fans broke the record of 136.6 set by Seahawks fans during a game against San Francisco earlier this year.

"The Kansas City Chiefs fans in the fourth quarter with the 30 seconds on the clock, I don't know what happened but they exploded," Phillip Roberston of the Guinness World Records told CBS affiliate KCTV. "They left it until the last second. Incredible, great stuff."

To put that in perspective, a jet engine at 100 feet is about 140 decibels.

"I had people who'd been coming to Chiefs games for decades come up to me and say, 'I've never heard it that loud,'" said Chiefs chairman Clark Hunt, whose family's franchise has long claimed that Arrowhead Stadium is the loudest in the league. "It's very difficult for a team to play in that."

That may be an understatement.

The Raiders struggled with the reverberating sound all afternoon, and were whistled for 11 penalties - several of them were false starts and for delay of game, simply because nobody in the visiting huddle could hear each other talking.

"It was a tough environment," Raiders quarterback Terrelle Pryor acknowledged.

The record-setting attempt was planned by Chiefs fans but had support of the organization, which paid $7,500 to fly an adjudicator from Guinness to Kansas City to document the effort. It turned out to be Philip Robertson, who also was on hand when the Seahawks set their mark.

"They destroyed any Premier League hopes of attaining this record, I can tell you that, and I'm a Brit that loves the Premier League," Robertson said. "It was extraordinary."

Robertson said that the sustained level of noise inside Arrowhead Stadium was greater than at CenturyLink Field, when Seattle set the record. But all that matters for the record books is the peak volume, and it appeared as if the Chiefs were going to come up short as the game wound down.

"In the fourth quarter, they got to 135.4, and that's where we thought they were going to finish," Robertson said. "Heads dropped, but then the fans really started working together."

The result was a record-setting din that shook the stadium's press box.

"We were really trying hard to get our calls to each other on defense. It was really tough," Chiefs safety Eric Berry said. "I had to actually go up to some of my teammates and yell in their ear what the calls were. But we love it, man. That's a great feeling."

Chiefs coach Andy Reid said he felt the ground shaking, and quarterback Alex Smith said he had a hard time communicating with teammates on the sideline when the crowd was at its peak.

Always when the Raiders had the ball, of course.

"The way the crowd was going, that was tough," Smith said. "I was sitting there on the sideline, and I could tell, it was hard environment to execute in."

Did he feel just a little sorry for Pryor trying to make his calls?

"Not at all. I've had my fair share of those," Smith said with a smile. "But I don't know if I've seen anything like that. That was pretty special."