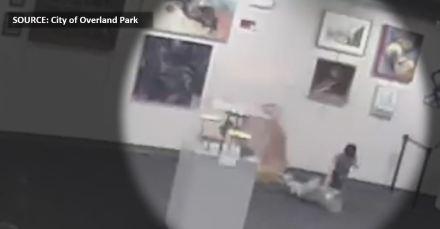 Surveillance video recorded last week at the Tomahawk Ridge Community Center in Overland Park, Kansas, shows two young boys running around and playing with each other while a group of adults sat and chatted nearby. It was all fun and games until one 5-year-old decided to stop and admire the art.

The boy can be seen hugging the base of a sculpture called "Aphrodite di Kansas City," by local artist Bill Lyons. The statue starts to wobble and tilts towards the floor, then mighty Aphrodite comes tumbling down.

The boy appears uninjured, but the statue did not survive the fall unscathed. The boy's mother, Sarah Goodman, said she initially thought it would cost around $800 -- but that wasn't even close. "No, it's $132,000!" she said she later found out.

The family received a letter from the City of Overland's insurance company accusing them of negligence for not monitoring their children, reports CBS affiliate KCTV of Kansas City.

Goodman blamed the center. "It's in the main walkway. Not a separate room. No plexiglass. Not protected. Not held down," she said. "There was no border around it. There wasn't even a sign around it that said, 'Do not touch.'"

The incident has sparked a debate -- should the parents have to pay for their child's mishap?

The statue was on loan to the city and "we are responsible to protect the public investment," said Sean Reilly, a spokesman for the City of Overland Park. He said the display was never meant to be touched. "There's a societal responsibility that you may not interact with it if it's not designed for interaction," Reilly said.

Last week, Goodman said the price was "astronomical" and she was waiting to see if the city would take legal action against her. Fortunately, it appears the matter will now be handled between insurance companies.