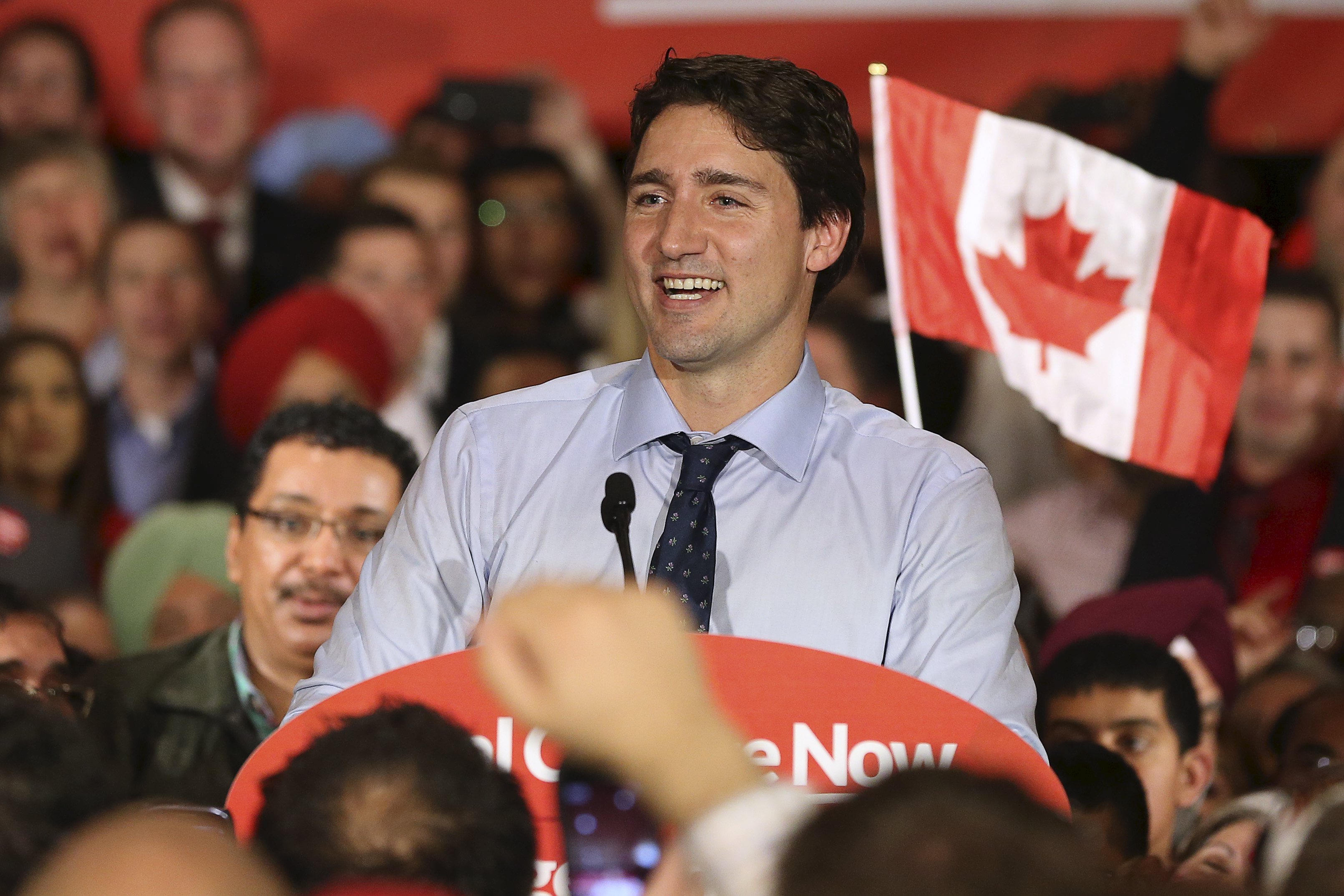 TORONTO -- Justin Trudeau has fulfilled the great expectations he was born into, following in the footsteps of his storied father to become Canada's next prime minister.

Now, he has the chance to restore the late Pierre Trudeau's Liberal legacy, which has been under siege during 10 years of Conservative rule under Stephen Harper.

More than 40 years ago, no less than the most powerful man on the planet predicted the younger Trudeau's destiny.

"Tonight we'll dispense with the formalities. I'd like to toast the future prime minister of Canada: to Justin Pierre Trudeau," Richard Nixon said during a state dinner in Ottawa hosted by Pierre Trudeau in 1972.

Justin Trudeau was four months old that day, the first born of a dashing prime minister who drew comparisons to John F. Kennedy after rising to power in 1968 on a wave of support dubbed "Trudeaumania." The architect of Canada's version of the Bill of Rights, Pierre Trudeau remains to this day one of the few Canadian politicians widely known to Americans.

Harper fought hard to reverse the image of a Liberal Canada, cutting corporate and sales taxes and removing Canada from a climate change agreement. The younger Trudeau wants to put Canada back on the course his father set, pledging to hike taxes on the rich and run deficits for three years to boost government spending and shore up a shaky economy.

Despite his grandiose beginnings, Justin Trudeau projects a more casual persona than his glamorous father, who dated movie stars such as Barbra Streisand, married, had children and divorced while serving as prime minister between 1968 and 1984, with a brief interruption.

A 43-year-old former high school teacher, nightclub bouncer and snowboarding instructor who until recently sported long hair, Trudeau first captured national attention in 2000 with a moving eulogy at his father's state funeral. He challenged the country to cement Pierre Trudeau's vision of a united and multicultural Canada, moving many people to tears.

But it would be eight years later before Trudeau ran for office, winning a seat in Parliament representing a working class district of Montreal. By then, Harper had been in power for two years, intent on putting a distinctly more conservative face on the nation of 35 million people.

The Liberals, beset by years of infighting and ineffective leaders, had their worst electoral defeat in 2011 when they came in third behind the traditionally weaker left-of-center New Democratic Party. But Trudeau increased his share of the vote in his own district and quickly rose to become the hope of his party. He became Liberal leader in 2013 and has worked to shed the party of its sense of entitlement.

Harper's Conservatives pilloried Trudeau during the campaign as inexperienced. But Trudeau tapped into an appetite for change and worked his boyish image to project an approachability that belied his privileged background.

"He has an aura. He's very personable. People like Justin. He projects sincerity and interest and openness," said Stephen Clarkson, a political economy professor at the University of Toronto.

In his memoir "Common Ground," Trudeau discussed his turbulent upbringing. His mother, Margaret, was 22 years old when she married the 51-year-old prime minister in 1971, and she quickly earned a reputation for partying with the Rolling Stones and at New York's Studio 54. The couple had three sons but separated when Justin was six.

Justin Trudeau and his brothers were raised by his father. His mother battled depression, particularly after the death of her son Michel, Justin's brother, in an avalanche in 1998.

"The truth is, my mother was very ill," Trudeau wrote. "She suffered a severe mental illness."

However, he wrote that that he grew up free of much of the emotional trauma that divorce can inflict on children.

Trudeau, the second youngest prime minister in Canada's history, now brings his own young family to Sussex Drive, the official residence of the prime minister in Ottawa where he spent much of his childhood. Married to former Quebec television host Sophie Gregoire, Trudeau has three children: Xavier, 8, Ella-Grace, 6, and one-year-old Hadrien.

Like his father before him, Trudeau is sometimes compared to another U.S. president who rose to power at a young age, Barack Obama.

"You want a government with a vision and an agenda for this country that is positive and ambitious and hopeful. Well, my friends, I promise you tonight that I will lead that government I will be that prime minister," Trudeau told supporters at a victory rally in Montreal, echoing Obama's campaign themes of hope and change.

Nelson Wiseman, a political science professor at the University of Toronto, said Trudeau generates the same excitement among his supporters that Obama did in 2008, along with big expectations that will be difficult to meet.

"There is no doubt about it, Justin is fabulous with people. He's a great people person," Wiseman said. "Barack Obama used to enter a room and it just changed."

And like Obama, he said, "There is a lot of hope invested in Justin."