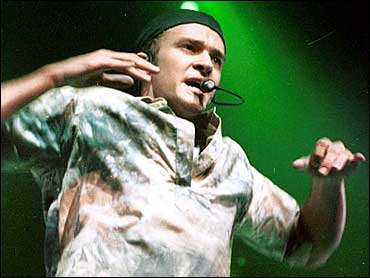 Justin Timberlake is going from center stage to the sidelines as a special correspondent for Turner Sports.

The 'N Sync singer will report from several sports events for the cable channel TNT, including the NBA playoffs, NASCAR races and the PGA championship. For another channel, TBS, he'll appear at major league baseball games and college football games.

"We are excited at what this unique marriage between the world of sports and entertainment can bring to our high-profile sports properties," Mike Pearl, executive producer for Turner Sports, said Tuesday. "Justin's interest and enthusiasm not only in the NBA, but in all sports should help provide our broadcasts with a new, fresh approach."

The 22-year-old pop star has played in the celebrity basketball game during the NBA All-Star Weekend the past two years. Last year, he hit a long-range jumper over fellow TNT analyst Kenny Smith, who won two championships with the Houston Rockets.

Other members of NSYNC have been busy as well.

Fatone stepped into the lead role of Mark, a struggling filmmaker who represents the collective moral conscience among an eclectic group of 20-somethings living in Manhattan's East Village.

Also last year, Lance Bass trained at the Cosmonaut Training Center in Russia, with hopes of making a trip into space. He was ultimately rejected.